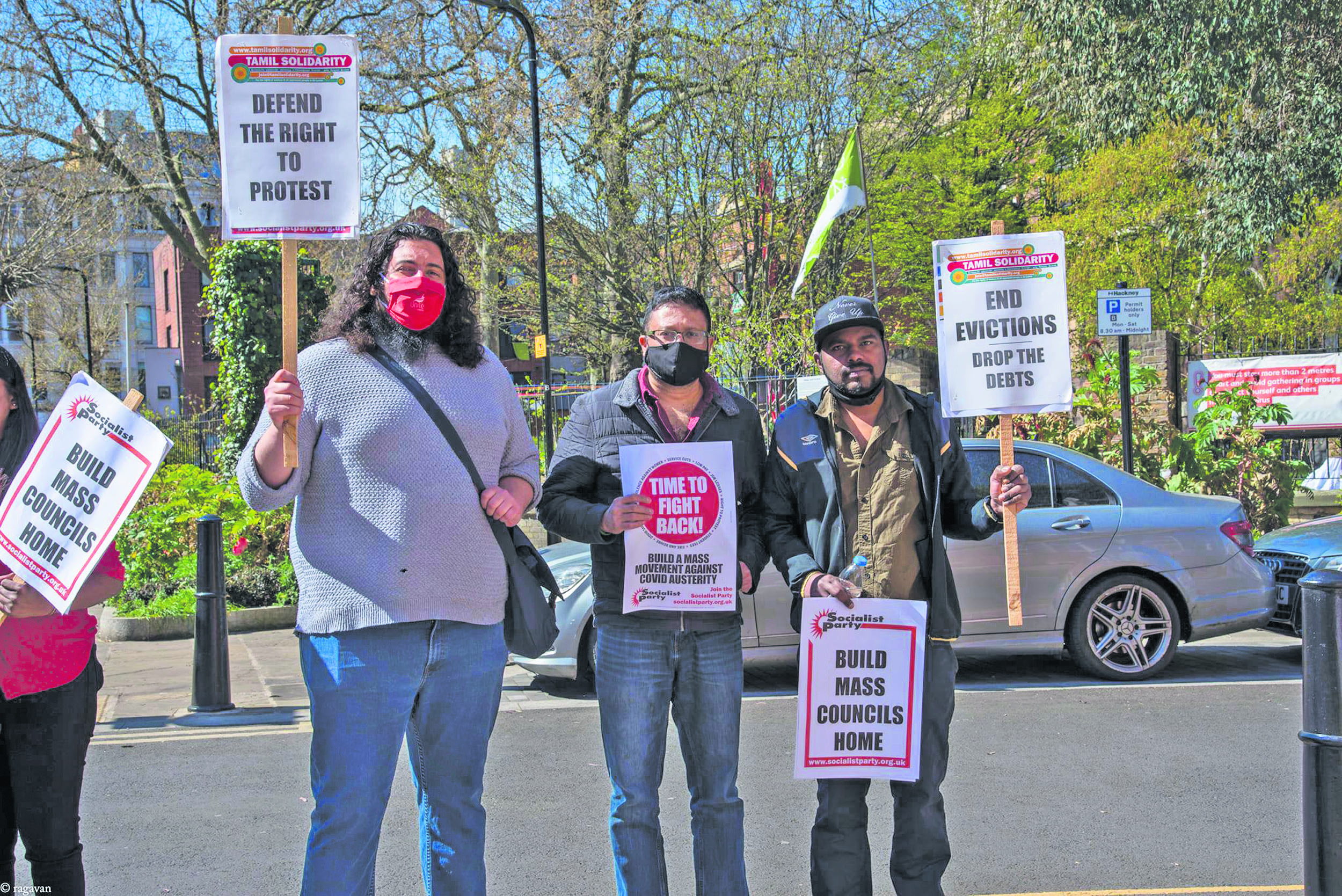 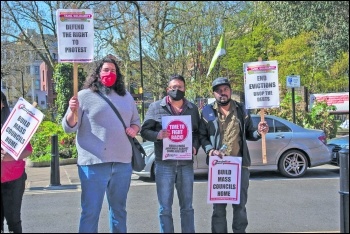 A lively and energetic day of action on housing swept through East London on 17 April. Socialist Party members, Refugee Rights activists, housing campaigners, striking workers and others protested outside and inside the offices of property management firm City Rooms in Stepney Green. The action was called by the Unite housing workers’ branch and the Social Housing Action Campaign in response to the housing crisis which has plunged to new depths during the pandemic. The protesters put forward the slogan ‘stop the evictions, drop the debts’. At the same time, further protests took place outside offices in Stratford.

City Rooms has told Socialist Party member Lawanya that she owes thousands of pounds after she was forced to break her contract because she could not afford their exorbitant rent.

The protest in Stepney Green followed a march from the country’s first ever council housing estate in Shoreditch which garnered big support from passers-by as it made its way through the East End.

At the same time, in Newham, the London Renters Union picketed the office there, and earlier, Socialist Party members took part in a protest on the Carpenter’s estate demanding that empty homes are filled with people who need them and that those homes should be ‘social’ and affordable.

Speaking at the opening rally at the Boundary estate, Lawanya said: “I spent three quarters of my wages on rent to City Rooms, a multi-million pound company which is now chasing me for rent for time I did not live there. This is a situation faced by many.”

By picketing, occupying, protesting and handing in a letter to City Rooms, we sent a message that Lawanya has a campaign behind her that will not stop until the outrageous demands placed upon her are dropped. In occupying the City Rooms office, we also urged workers there to join a union, a call led by Unite assistant general secretary Howard Beckett who spoke at the rally and marched with us right into the City Rooms offices.

Other speakers included Paul Kershaw and Jack Jeffrey from the Unite housing workers’ branch and Ferdy Lyons, a Social Housing Action Campaign committee member, all of whom are Socialist Party members and candidates for the Trade Unionist and Socialist Coalition on the London-wide list for the Greater London Assembly. Athena Parnell, a striking worker at Goodlord tenant referencing agency spoke, as did Doug Holton, from Equity entertainment workers’ union and Hackney Trades Union Council. A solidarity message was also received from the London Renters Union.

The Socialist Party is standing as part of TUSC in this May’s elections on a programme which includes solving the housing crisis. For mass building of council homes and democratically set rent caps. Secure tenancies for all, and the right to leave tenancies without extortionate debt claims.