Link to this page: https://www.socialistparty.org.uk/articles/32446 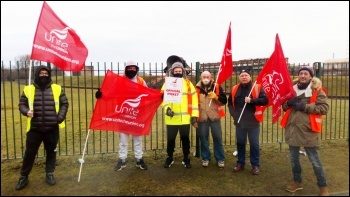 The Socialist Party believes that Sharon Graham and Howard Beckett are the best candidates of those declared. What is now the best way to ensure that Unite maintains its left position?

The Unite executive has finally triggered the union's general secretary election. It is a vitally important election, both industrially and politically as the Covid pandemic persists and the stark economic prospects become ever clearer.

Len McCluskey's election a decade ago opened up the opportunity for Unite, formed out of the merger between Amicus and the TGWU, to play a leading left role in the trade union movement. It is crucial that there is no threat of a retreat from this role.

At this stage, there are four declared candidates: assistant general secretaries Steve Turner and Howard Beckett, executive officer for organising and leverage Sharon Graham, and the former West Midlands regional secretary Gerard Coyne. To get on the ballot paper, a candidate needs to win the nominations of at least 174 branches.

When he stood in the 2017 general secretary election, Gerard Coyne was backed by the Blairites in Labour. They, and the employers, saw his candidacy as not only an opportunity to move the union into partnership with big business, but also to win Labour's biggest union affiliate, as a huge step in weakening and overthrowing Jeremy Corbyn, the then left Labour leader.

However, while that attempt was beaten back, this is the first Unite leadership election since Starmer's decisive defeat of Corbynism within the structures of the Labour Party.

On the surface, a Coyne victory could be seen by the Starmerites as the best outcome to further consolidate their position. But Steve Turner, while not a supporter of Tony Blair's New Labour, has made it clear that he would be prepared to work with the Labour right. This would mean a retreat to the position held by former TGWU leader Bill Morris who reconciled with Blair and New Labour.

In the hustings organised by the United Left group within the union last summer, Turner deliberately counter-posed himself to Howard Beckett's opposition to Starmer, arguing that a general secretary isn't an attack dog but has to be in the background doing deals. Such an approach raises the possibility of Unite moving to the right both politically and industrially if Turner wins.

It is entirely possible that the Starmerites may prefer Turner to Coyne, who is seen as an open representative of the bosses. Turner, nominally on the left, could more easily carry a policy of conciliation with Starmer amongst Unite members wary of a revived Blairism. In fact, the BBC reports that an unnamed Labour shadow minister was urging Coyne to "rethink" standing, presumably not to take votes away from Turner.

This doesn't mean that in a straight fight between Turner and Coyne that Unite members should regard them both as the same. But it is vital that there is at least one candidate with a fighting programme who makes it onto the ballot paper from the nomination stage of the general secretary election, prepared to build on McCluskey's record rather than move away from it.

We believe that Sharon Graham and Howard Beckett are the best candidates - of those declared - to ensure that Unite maintains its left position. We have some criticisms of both, as we did with Len McCluskey, but Unite activists have to analyse the programme and policies of the candidates and assess who opens up the best opportunity for a fighting union on both the industrial and political fronts.

Sharon Graham is seen by a big layer of members and reps as looking to strengthen the union industrially in the workplace. This means increasing union density and reps in established workplaces and building the union in new sectors that are recruiting, such as Amazon. However, some of Sharon's material can create the impression of her being non-political and even neutral in the fight in Labour.

Under either Sharon or Howard, Unite must have a fighting industrial but also political strategy. The trade unions drew this conclusion over 120 years ago after the hard experience under respective Tory and Liberal bosses' parties. The Covid pandemic and the threats to jobs, and terms and conditions, have made it even more important that unions adopt political demands that complement strengthening the union industrially in the workplace.

Along with strikes to stop 'fire and rehire' at British Airways, or action against closure threats in the steel industry, it is necessary to raise re-nationalising these companies. This poses the need for a political force for workers, on a socialist programme, that faces up to the reality of the defeat of Corbynism in Labour.

Howard Beckett has led the political opposition to Starmer within Labour, including on the party's national executive committee (NEC). He has been a central figure in fighting the moving of Labour to the right - fighting for Corbyn to be restored to membership of the Parliamentary Labour Party, calling for Labour's national conference to be recalled, and supporting Anna Rothery's candidacy as Liverpool Labour mayor before she was debarred from standing by Starmer's Labour machine.

But like much of the Labour left, Howard appears to be restricted in his fight against Starmer to what is possible within the confines of Labour. This can leave the left, including in affiliated unions such as Unite, neutered by the bureaucratic dead hand of Starmer.

Instead of calling for Unite members to join Labour, as Howard is currently doing, it would have been far better, for example, to have called on Anna Rothery in Liverpool (and Jeremy Corbyn in London against Sadiq Khan!), to have stood independently for mayor on a fighting socialist, anti-cuts programme. This would have meant a clash with the Labour right but would have given workers a fighting lead and the prospect of a left political vehicle.

Our criticism of both candidates has been made constructively, to give Unite members the best possible programme to vote for. Sharon has raised only supporting candidates that support Unite members and policies, and recently said in relation to Sadiq Khan and Andy Burnham: "The Labour mayors of Manchester and London must lead the way by using their powers to outlaw fire and rehire on their watch" on the buses. These are positive steps in the right direction. In Manchester, Unite bus drivers are taking indefinite strike action against their employers' attacks.

In contrast, the Huffington Post on 28 April quotes Steve Turner as saying: "I want to see Labour councillors elected on May 6. I want to see Labour mayors. And it frustrates me, it angers me sometimes, that some of the union's campaigning right now is pitched against our mayors, against Sadiq and Andy Burnham. What's that all about? I find that incredible that we would do that" ('Unite's Steve Turner warns a split left vote could hand union to centrist rival').

We believe that the best chance to take on Turner and to prevent a move to the right in the union would be for Howard and Sharon to agree for one left candidate to stand. We would be in favour of discussions that would bring out the best militant industrial and political programme from their policies. Such an agreement could transform the election, creating real momentum for a joint fighting candidacy.

An agreement hasn't developed at this stage but we believe it is important to continue to raise this as the best way forward. However, it would be disastrous if by both candidates standing they cancel each other out, conceding branch nominations to Steve Turner. This is possible under the union's rules, which stipulate that branch decisions are made by a simple majority. So there could be situations where Howard and Sharon supporters together outnumber Steve Turner backers, but by splitting the vote they hand the branch nomination to Turner (or Coyne). This could threaten them getting on the ballot paper.

Therefore, with the situation as it stands at the moment, for the forthcoming nomination stage in the Unite general secretary election, we call on left members in each branch to come together in pre-meetings to discuss whether it is Howard or Sharon who has the best chance of winning their particular nomination and to unite behind that candidate. This process itself can bring together many of the best activists in the union as a necessary step in the building of a new left.

The United Left candidate selection meeting last summer saw Steve Turner narrowly win the selection - by three votes - in a highly contested and controversial ballot. But the fact that he could win with his position of 'lesser-evilism' regarding Starmer, and that valid objections to the ballot process were brushed aside, shows that the United Left, under the current leadership, cannot now be considered to be a democratic, fighting left organisation of Unite members and a new one is now needed. This has been confirmed by the decision of the United Left leadership to summarily expel members who are not supporting Steve Turner.

It is clear that a new left needs to be built in Unite, with a fighting political and industrial basis, that can attract the best fighters in the union. This is essential whoever wins the election, either to act as a check on a left general secretary or to challenge one that wants to move Unite to the right.

The Socialist Party calls on Unite activists to ensure that after the nomination process, there is a fighting candidate on the ballot paper.


This article should be read in conjunction with 'The Battle for Unite' (Socialism Today, November 2020)

Deadline for receipt of nominations: Wednesday 9 June 2021 at noon

Deadline for voting papers to be returned to the Independent Scrutineer: Monday 23 August 2021 at noon

This version of this article was first posted on the Socialist Party website on 28 April 2021 and may vary slightly from the version subsequently printed in The Socialist.