After Biden's speech to the US Congress on 28 April, below is an edited extract from 'An era of capitalist turmoil', a statement from the Committee for a Workers' International, the international organisation which the Socialist Party is affiliated to. 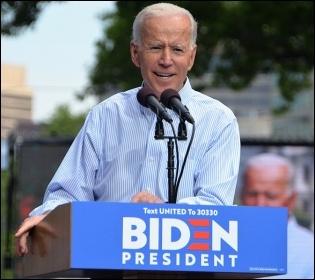 Joe Biden's election as US president has opened a new chapter in the crisis in US imperialism. His victory has already resulted in important changes in domestic and international policy. This change of course has led to an increase in support for him and will result in a certain honeymoon period.

However, this will not last indefinitely, as his programme will not solve the underlying social and class polarisation which has opened in US society. The economy is still ten million jobs short of its pre-pandemic peak. 50% of households earning less than $35,000 a year have fallen behind in housing payments. 25% of them report not having enough food.

The stimulus package of $1.9 trillion, followed by a proposed $2 trillion investment programme on infrastructure projects, will have an effect and are very popular at this stage. Biden is now also proposing an additional package, the 'American Families Plan', worth about $1.8 trillion.

According to the New York Times, a working single mother of a three-year-old earning the federal minimum wage of approximately $16,000 a year could gain $4,775 from the bill. Workers employed on federal infrastructure projects would be paid a minimum wage of $15 an hour.

Yet as the economist Nouriel Roubini calculates, of the $1,400 direct payment already sent to US citizens, only one-third will find its way back into the economy due to accumulated debt and housing payment arrears. This will, of course, reduce debt, but may not lead to an immediate substantial and lasting boom for the economy.

Biden's infrastructure programme is largely to expand existing projects, to be paid for by an increase in corporation tax from 21% to 28%. This has provoked protests from some sections of the ruling class. Yet even this is far below the historic levels of corporation tax post-1945 which were frequently over 50%! Trump reduced the rate to 21% from 35%, which is where it was under Obama.

However, Biden's measures will have some effect. They may be followed by further stimulus packages. The ruling class and Biden have been driven in this direction by the objective situation they confront. Yet they will not resolve the underlying crisis in US society.

Even Roosevelt's New Deal was not sufficient to prepare the way for the huge economic upswing which followed the Second World War. This developed because of the massive armaments programme needed during the war and the situation internationally which followed it.

The ruling class in the USA will face a further political crisis as illusions in Biden eventually wane and new struggles emerge.