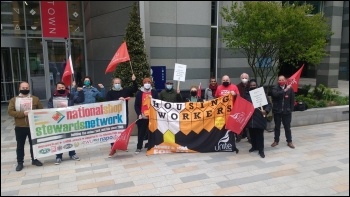 St Mungo's strikers had a warm welcome when they addressed the Hackney May Day march on 1 May. Jackie and Vicko spoke at the start of the march. The property services workers have been on continuous strike since 22 April demanding an end to bullying and victimisation.

Marchers heard how a St Mungo's worker had returned from sick leave after surgery for cancer. Rather than being allowed to return gradually, she was expected to work through a backlog of tasks that had accumulated during her sick leave. This was contrary to advice given to the charity by its own occupational health practitioners.

When St Mungo's failed to properly investigate a grievance about bullying in the workplace - refusing to speak to twelve witnesses - the workers had no option but to strike. Far from seeking a solution, the management have put the rep who took out the grievance on a gross misconduct charge, which means he could lose his job.

Management argue that raising concerns about bullying had caused distress to senior managers and that this constitutes gross misconduct!

Another charge is that his reluctance to conduct a 'back to work' interview with the worker who was recovering from surgery amounted to insubordination.

Half of Unite reps at St Mungo's face formal HR processes about their own employment and 68% of respondents to a Unite survey said they had experienced bullying from senior management. St Mungo's management have refused to discuss this survey on the grounds that they do not see bullying as a collective issue.

One worker told us: "I just feel that I've been so grossly mistreated by management that I had to speak out and express to them how unhappy I was. I followed the processes in place at St Mungo's and as a result I was treated despicably! I am not happy and this is a reason why I've gone out on strike.

"I'm a union rep and I'm here to support our members. But they are targeting us. We have been victimised, bullied and discriminated. St Mungo's you are a bully! Do better!"

Unite believe that senior managers are attempting to intimidate the workforce and has appealed to Chief Executive Steve Douglas to rethink his position.