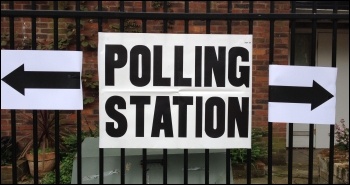 According to the Queen's Speech, people in the UK will need 'valid' photo ID to be able to vote in person in future elections. Most commentators think that the plan is to have this new law in force by May 2023. The government also plans to abolish the Fixed-term Parliaments Act, in order to give the prime minister the power to call a general election whenever he wishes - May 2023 for instance.

Cabinet Office research found that 9% of UK adults do not have the kind of ID that will allow them to vote under the proposed new law. The vast majority of these people will be poor, and, of course, black, Asian and minority ethnic (BAME) people will be affected disproportionately. Anyone whose documents are in the hands of the authorities - for instance, if they are disputing a Home Office asylum or immigration decision - will have special difficulty in voting.

In the last general election, cases of 'personation' - fraudulently presenting yourself at the polling station to take someone else's vote - numbered single figures, according to the Electoral Commission. Even Tory MP David Davis said it was a "solution in search of a problem". The ex-leader of the Scottish Tories was a little more succinct, "total bollocks" is how she described the move.

For a right-wing prime minister whose biography reads as a trail of broken promises, however, there is a very real problem. Even Boris Johnson recognises that his 'popularity' may not last.

As the cost of the government's Covid response comes to weigh heavily on public services, public sector pay, and in and out of work benefits, there will be an inevitable backlash. There is little support for renewed austerity outside of the boardrooms of Britain's vulture capitalists.

This crude attempt at voter suppression must be seen together with the Police, Crime, Sentencing and Courts Bill, which seeks to limit protest and direct action. It is part of the Conservative's preparations for a more authoritarian approach to governing the UK.

Given the divisions in the Conservative Party, and the overwhelming opposition in wider society on this issue, it is entirely possible that there could be a U-turn. The organised working class has the power to force this. It must do so as part of a spirited and concerted resistance to renewed austerity

In this we will have to grapple with a major problem for working-class voters. We do not yet have a mass party of our own advocating a socialist alternative to the hardships of capitalism.