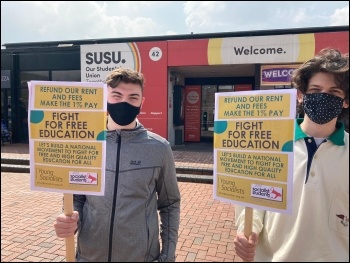 The Tories are attempting to position themselves as defenders of free speech in their new Higher Education (freedom of speech) Bill. The reality is they have no interest in allowing genuine freedom of expression, as evidenced by the current attacks on the right to protest in the police and crime bill (see 'We will not pay the cost of Covid! Defend the right to protest').

Rather, the freedom of speech bill represents an attempt by the government to reassert authority within universities, particularly over left-wing students who are increasingly critical of big business influence in education.

The government is overstating the influence of so-called 'cancel culture' in British universities to justify the measures introduced by the bill, which includes a "free speech condition" universities must meet to receive public funds. It will also create the role of "freedom of speech enforcer" to oversee a new complaints scheme, with powers to issue fines.

Critically, student unions must adhere to the condition and be held liable to financial penalties for freedom of speech "breaches" and if they do not "actively promote" freedom of speech. If passed, it will be the first time the Office for Students will have regulatory powers over student unions, and represents a significant attack on student democracy.

The catalyst for the bill was when the former home secretary, Amber Rudd, was cancelled as an international women's day speaker at Oxford Student Union, following student protests that highlighted her role in the forced deportations revealed in the 'Windrush scandal'.

The government has used that case to argue that censorship and silencing are rife. Yet research by the Office for Students, the regulator overseeing the bill's implementation, found that in 2017-18 less than 0.1% of external speaker requests were rejected by universities or student unions.

Meanwhile, the government's record on this matter speaks for itself. Last year, the government banned schools using resources from anti-capitalist organisations because it is an "extreme political stance". Just last month, Gavin Williamson tweeted that he would instruct the Office for Students to suspend funding to institutions that do not adopt the controversial IHRA definition of antisemitism.

In reality, the government is exaggerating university 'cancel culture' as a tool to strengthen right-wing, pro-capitalist ideas in universities, as well as to try and shore up a section of its electoral base.

Historically, universities have been one way in which the ruling class has established and promoted its ideas. This bill is an attempt to assert this ideological control, particularly within student unions, and is part of a broader strategy to direct research and teaching in the interests of big business.

However, the idea that universities are left-wing institutions is a farce. Their actions during the pandemic attest to this. The real threat to freedom of speech comes from the current funding model, which the bill does nothing to address.

Research funding is highly competitive, and is increasingly dictated by capitalist interests, with little funding for critical theory or research questioning the status quo. Research should be funded to meet the genuine needs of society, including for culture, not the narrow economic interests of big business.

Furthermore, the running of universities like a business has resulted in the sector becoming one of the most casualised. Precarious contracts have stripped academic staff of the right to speak and research freely for fear of losing their jobs. Trade union reps have been targeted for redundancy at multiple universities in blatant cases of trade union victimisation. But the bill does nothing to address these issues which, in some cases, are costing workers their jobs.

Genuine freedom of expression, debate and discussion in universities can only be guaranteed through the participation of university staff and students in elected committees within a publicly funded university system, free from capitalist interests.

Student unions and campus trade unions must resist this bill, which is narrowly focused on the freedom of speech for the bosses and their defenders.