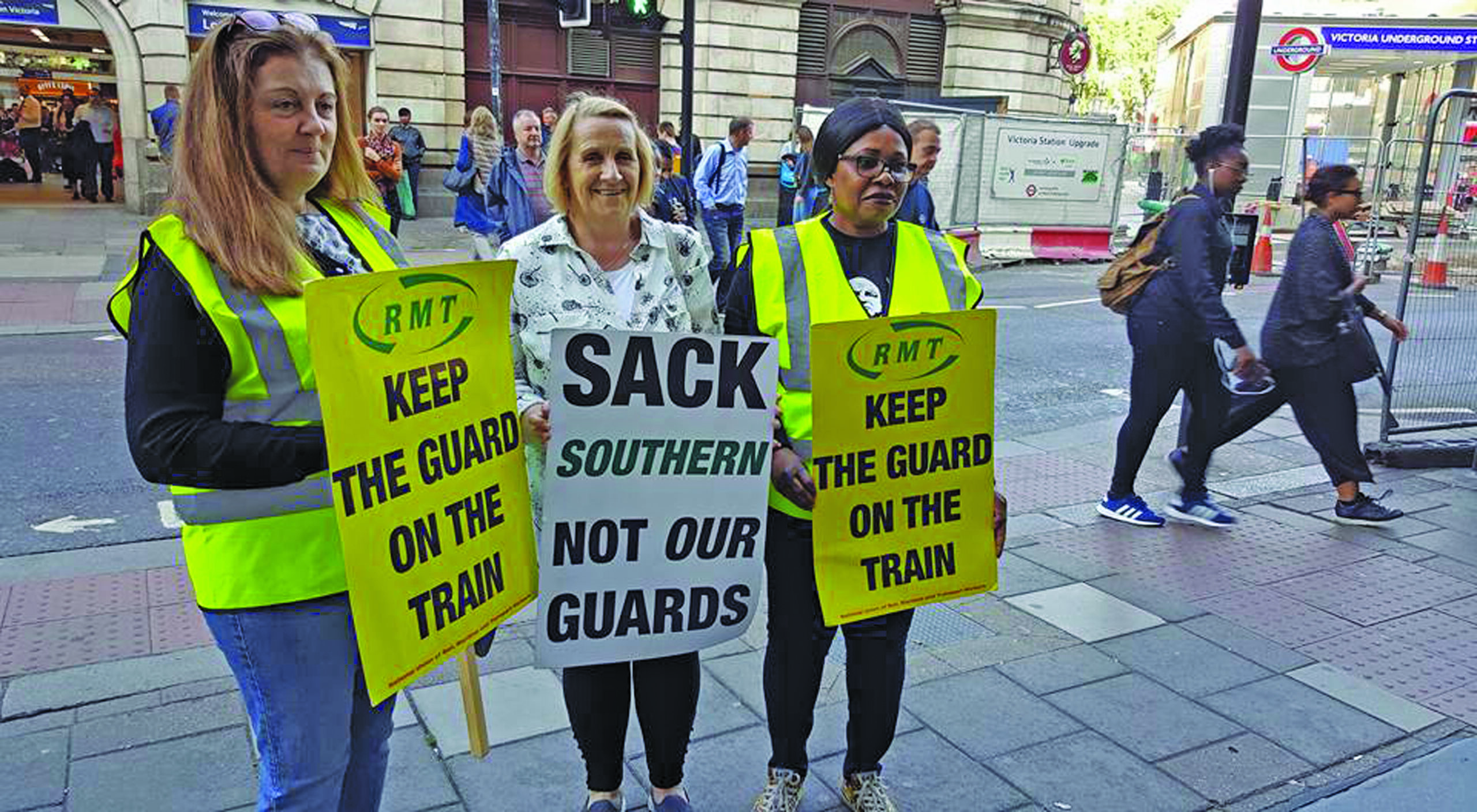 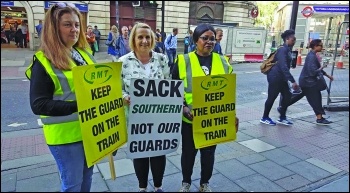 Train guards in RMT union took strike action in 2007 to defend the role of guards on trains from attacks by bosses. photo: Rob Williams   (Click to enlarge: opens in new window)

The Tories have announced there is to be a reorganisation of Britain’s national railway system, which will see the biggest shake-up since privatisation in the 1990s. Privatisation is widely accepted as having turned an underfunded public service into a highly subsidised private racketeering exercise. That is not set to change. Rather, shareholders are set to shore up a more stable revenue.

Currently, Britain’s railways are a complicated web of different organisations: the government’s Department for Transport which specifies the train services required; Network Rail – the arms-length government-owned company which owns and maintains the infrastructure; Train Operating Companies (TOCs) which are granted franchises to run the train services, and three Rolling Stock Leasing Companies (ROSCOs) – private firms which own the trains themselves and hire them to the TOCs. Beyond these headline organisations there are an array of outsourcing firms and contractors who carry out cleaning, maintenance and other tasks.

Each organisation from Network Rail downwards takes its cut, adding unnecessary additional expense to satisfy their shareholders’ demands for profits.

The lust for profits within our railways brought about the creation of a body of railway lawyers, hundreds strong, whose only job is to apportion blame for train delays in order to avoid their respective organisation footing the bill. This is hardly surprising as, by levying fines against those responsible for each minute of delay instead of working collectively to try to resolve problems, the capitalists involved will try to pass the buck to someone else.

So disastrous has been the privatisation of the country’s railways, the industry has been on life support since day one. For instance, when privatisation commenced the railways received around £1 billion in subsidies; today that figure is over £4 billion. What exactly have these private companies brought to the table? Very little it seems, yet as more and more taxpayers’ cash is pumped in they have been leeching off eye-watering sums of money as they take their cut.

According to transport workers’ union RMT, since 1997 TOCs have trousered £3.2 billion in franchise dividend payments, and the three ROSCOs extract on average £260 million every year. Every penny of this windfall should have been re-invested in the railways.

Therefore, the government’s plans to re-organise the railways, with a view to eliminating waste, provided an ideal opportunity to renationalise the railways and sweep away all of the spivs and profiteers from our national railway system.

This is not going to happen. In fact, the profiteering is set to continue, this time with even less risk for the TOC shareholders, as they are to be paid a guaranteed sum as a management fee rather than relying on revenue from fares. Great British Railways will subsume Network Rail and the TOCs, and will aim to provide a unified organisation, which the government claims will offer some more flexible ticketing options for the more flexible workforce emerging in the post-pandemic period.

The government report says nothing about the rampant profiteering by parasitic ROSCOs and others that is bleeding the industry dry. However, the implications for railway workers are clear: staff costs are to be driven down, which will inevitably bring the employers into bitter conflict with the rail unions. TOC and Network Rail workers are already subject to a two-year pay freeze: These proposals are guaranteed to pour petrol on the flames.

For socialists the only option is immediate nationalisation of the whole railway system under democratic workers’ control and management, with minimum compensation for the former owners, every penny of which should be granted only on the basis of proven need.

We do not have any need for TOCs, ROSCOs, contractors or any other parasitic organisations which serve no purpose than to extract profits from the railway system at the expense of the community as a whole.

71% of British TOC franchises are foreign-owned, many by national governments with their own nationalised railways! Numerous polls show a majority of the British public support renationalisation of the railways. That’s why the RMT union has a policy to fight for the genuine renationalisation of rail.