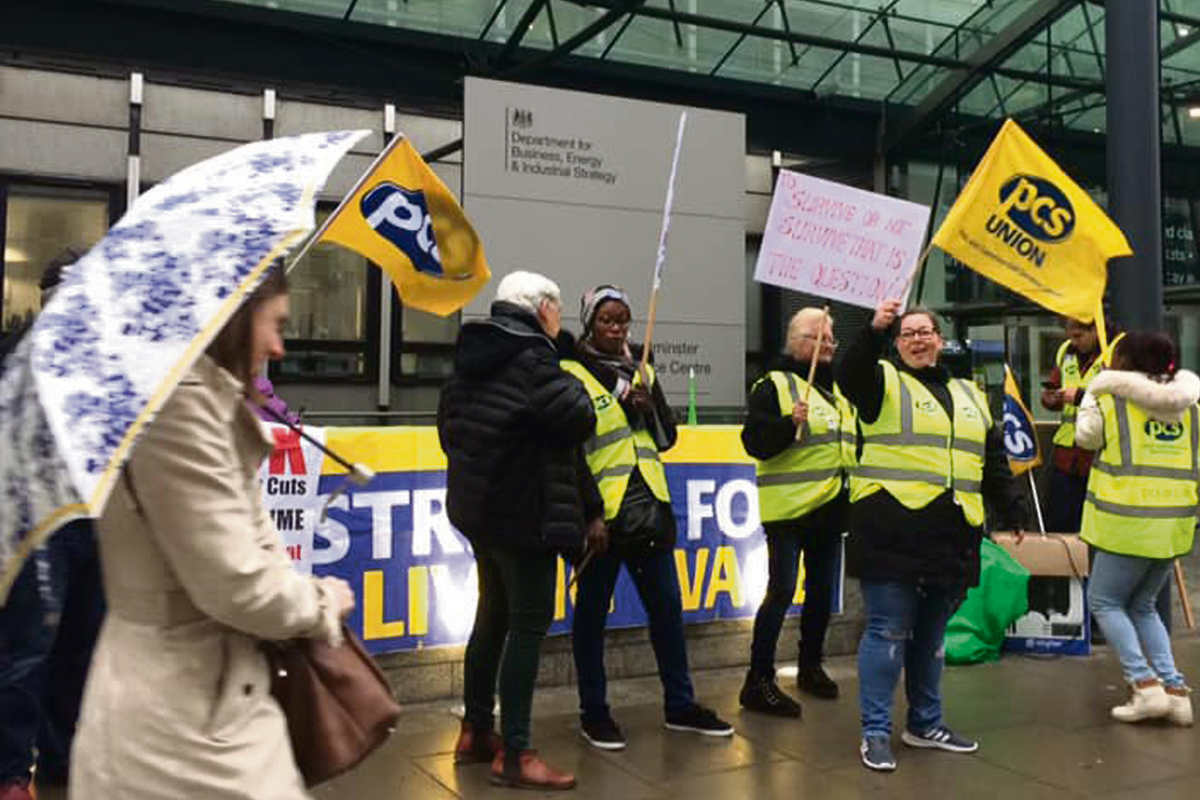 PCS annual delegate conference (ADC), the first for two years, convenes on 13 June in a new digital format that has already provoked outrage from the most engaged layers of the union’s activists.

Conference has traditionally been the democratic centre of the union, where branches can hold the national executive committee (NEC) to account for its actions over the previous year, and where the standing orders committee (SOC) is expected to stand up for the right of branches to be heard.

This year, for the first time in PCS history, branches do not have ownership of the conference agenda. It has been determined in advance by the NEC Left Unity majority, with the full support of the Left Unity-dominated SOC acting as their guard dogs.

For the first time ever, branches are restricted to submitting four motions, three on pre-ordained topics picked by the NEC, and only one on any subject of their choosing.

Once the SOC ruled on which motions could be heard, and with branches having no chance to democratically overrule the SOC, branches were given a pitifully short window for ‘reference backs’ to ask the SOC to change its mind.

Meanwhile, emergency motions were banned by the NEC, meaning that developing situations such as the Israeli military intervention in the Palestinian territories are missing from the conference paper.

Yet ADC is just as important this year as it ever has been. The last year has seen catastrophic decisions by the current leadership of the union, such as:

The letter to the Cabinet Office, which threw out our 10% pay claim.

The decision that a petition on pay was an effective substitute for a national campaign.

The refusal to provide steadfast advice to keep members safe during the Covid-19 pandemic, offloading this responsibility on to the shoulders of brave individual members and reps.

The total abdication of responsibility and leadership, in the hope that by appearing moderate and reasonable, the Tories would deal fairly with them.

This could be called naivety if the reps leading the NEC were new, but they are 30-year veterans.

The litany of failures is long – and so is the list of decisions reversed. “It’s too risky to ballot!” cried our brave leaders, at the outset of the pandemic. A decision they were forced to reverse when their trust in the Tories not to force people back into the offices was proved mistaken.

“Including pensions as part of the union’s national campaign weakens the focus of our pay campaign”, reps were told at ADC 2019, only for the NEC, in the dying days of the 2021 electoral year, to decide yes, pensions must be included in the campaign.

“Digital meetings should be mandatory!” was the cry that rang out at the NEC, and our proposal that they should be encouraged but not mandatory was voted down by the Left Unity majority.

The leadership of the union reversed its position when put under sustained pressure, seizes the position of its opponents, but maintains the same vitriolic, embittered rhetoric against the very opponents whose views it has just adopted!

The NEC cannot hide all of its craven antics, however, like the decision not to support Black Lives Matter demonstrations or demonstrations over the murder of Sarah Everard. We called for the union’s members to be mobilised, by encouraging those who felt they could demonstrate safely to attend, while offering avenues to protest at home for the others.

This was voted down amidst petty moralising about putting PCS members at risk. The most politically conscious PCS members attended these demonstrations in droves, the only difference was that there were no trade union banners around which to unite workers.

Socialist Party members, including two elected to the NEC in 2019, have steadfastly opposed the leadership of the union and its track record of posing on social media but otherwise sitting on its laurels. We have not been alone, fighting alongside independent socialists in the Broad Left Network and those attached to no faction in PCS.

The most recent elections saw the number of socialists on the NEC reduced, with Broad Left Network members going from four to one, and the number of socialists on executive committees in DWP and HMRC also thinned down a little. Far from discouraged, however, we will continue to hold the NEC and the other executive committees to account, and will continue to demand bold action to win for members.

Ensuring that conference 2021 adopts a fighting programme, and repudiates the tired rhetoric of the NEC, concealing as it does its lack of a plan, is the first step in building that fightback.

To all delegates, solidarity! The fight to reclaim our union continues.