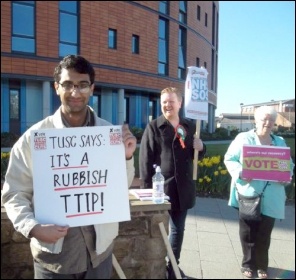 Since the UK's departure from the European Union, the Tory government has come under pressure from its backers in big business to establish trade agreements with as many countries as possible. It wants to ensure the continuation of British capitalism's access to markets, cheap labour, and raw materials.

One of these negotiations has been with Australia, aimed at allowing UK companies to sell certain goods there without the imposition of trade tariffs, and vice versa. A deal is expected to be announced before the start of the G7 summit.

Not all British employers see this as a positive. For example, the National Farmers Union warned of the "slow, withering death of family farms", presumably in fear of being undercut by competitors who are not subject to the same regulations.

But from the point of view of the working class, the Tories are utterly incapable of negotiating any trade deals which would serve our interests in any way.

The Australia deal is set to include an Investor-State Dispute Settlement (ISDS) system, which is a series of secretive courts that allow businesses investing overseas to sue the government of the host country for damages if policies are enacted which attack their profit margins.

For example, in 2017, US pharmaceutical company Eli Lilly won a claim against Canada for CA$500 million in response to attempts to control drug prices.

In 2018, the French company Veolia won a claim for US$268 million against the Egyptian government for increasing the minimum wage. And, shockingly, in 2012, Occidental Petroleum Corporation won $1.8 billion from the Ecuadorian state - roughly the same amount as the country's annual health budget!

There are currently 1,104 known ISDS cases, including claims against health and environmental regulations, climate change agreements, and attempts to protect indigenous land rights.

There is no equivalent of legal aid available for states attempting to defend themselves against claims, and even when they win they are often left out of pocket on legal costs. Legal fees average $8 million per case, and corporations' claims are often funded externally by financiers in return for a cut of the damages.

In 2006, the US civil engineering company Bechtel was forced to accept a token payment of $1 from the left-wing Bolivian government of Evo Morales.

Massive demonstrations had taken place in the city of Cochabamba six years previously in response to one of Bechtel's subsidiary companies implementing a huge increase in water prices. Morales stepped in and ripped up the firm's contract.

Feeling the hot breath of the Bolivian working class down their necks, the ISDS negotiated the nominal settlement.

This shows that to defeat this system of legalised extortion, mass mobilisations of workers, especially in the trade unions, indigenous populations, and others threatened by the claims, are what is needed.

A socialist government would undoubtedly be faced with huge legal claims in response to nationalising the key sectors of the economy under democratic workers' control, with compensation only based on proven need.

It would then be necessary to refuse to pay the claims, and instead mobilise domestic and international workers' solidarity against the ISDS.

The TTIP deal between the EU and the USA, which was due to include a ISDS provision, was put on the back burner in 2017 in response to huge protests and uprisings on both sides of the Atlantic.

Of course, nothing of the sort has been forthcoming from Keir Starmer's supposedly 'opposition' Labour Party.

In fact, it has been almost completely silent on the issue, because it is just as much in the camp of big business as the Tories are.

We now need to build a new opposition party, one that fights for the interests of ordinary working-class people against multinational corporations and their insatiable drive for profits.