In 2020, Latha Lawanya Ramajeyam, an asylum seeker at the time, was unable to make rent on her room due to the legal costs of her asylum case. Her property management, City Rooms, then pursued her through legal action for a punitive sum, including several months' rent on a room she had already vacated. 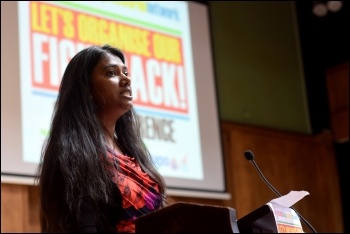 "When I explained my situation to City Rooms in 2020, after ignoring me for weeks, they called me into a meeting. A City Rooms manager told me to get the money from loans or from family and pay.

I couldn't do this. He told me to return the key that day and get out, which I couldn't yet as I had nowhere to go.

But because my contract had no 'break clause', City Rooms was able to legally demand several months of 'unpaid' rent on a room I had already left. They ignored my pleas, made no attempt to negotiate, and went straight to the small claims court.

You can't get lawyers who will represent you 'pro bono' in debt cases like this. But we found one who would at least help me enter a defence.

The London Renters Union also picketed their office in Stratford with leaflets explaining my situation. Every organisation which participated sent a message "that Lawanya has a campaign behind her that will not stop until the outrageous demands placed upon her are dropped."

The next day, after months of silence, City Room's director wrote to us offering to reach a deal! They also claimed they were 'not aware' of the weekly repayment offer we made during mediation. We set the record straight on that.

We phoned City Rooms' director on the day of the deadline. He wanted to negotiate the whole thing, then and there. We stayed firm.

During the call, City Rooms' director complained bitterly about our protest action. He told us "you know you've done wrong" and that it was "corrupted." It was clear this was decisive in winning talks, although he disagreed when we said that to him!

Workers and tenants should understand from this our collective strength and unionise. The history of struggle shows that no rights are ever just given, they are won by people demanding and then fighting to get them."