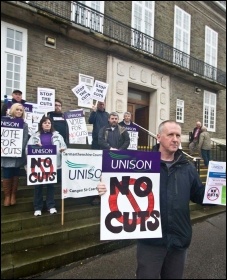 The June meeting of the steering committee agreed that developing and promoting a local people's budget could form the basis of a vibrant electoral challenge in the council elections scheduled for May 2022. There are over 200 councils with elections then.

The committee also agreed that other areas where there are no elections in May 2022 should not wait either. As society prepares to move on from the Covid pandemic a People's Budget campaign could play a central role in bringing trade union branches, campaigns and community groups together to fight at a local level for what communities will need, not what Tory austerity will demand.

Contrary to the impression given by the establishment mainstream media - which reduces 'politics' to games at Westminster (and, sometimes, the devolved parliaments) - the decisions taken by locally elected councils are central to the provision of many services that directly affect the daily lives of millions.

The Tories have made deep cuts to councils' funding in the past decade, but local authorities still account for over one-fifth of all public spending, with powers over housing, education support, adult social care, sports and leisure facilities, youth provision, transport, recycling and rubbish collection, libraries, children's centres, community grants, environmental planning, and many other services.

Most current councillors, including, unfortunately, the majority of Labour's 6,300 or so local councillors, see their role as administrators of austerity, not as campaigners for more and better services. A local People's Budget, however, could set a different agenda, based on what the community needs, and illustrate the need for a different type of councillor too.

Earlier this year the TUSC steering committee published a report examining the policy pledges made in Labour's 2019 general election manifesto under Jeremy Corbyn's leadership, which councils have the legal powers to implement today if they had the political will to do so. The report identifies 46 separate policies which councils could carry out, immediately, transforming peoples' lives.

Even just a selection of these policies could form the basis of a People's Budget to present to the local council. But inviting local trade union branches, campaign groups, community organisations, student groups and others to contribute would undoubtedly come up with more ideas, and lay the basis for a campaign for the local council to implement them now, using their reserves and borrowing powers to temporarily finance them while launching a mass campaign locally and nationally for permanent funding from central government.

How councils could use their powers to temporarily maintain a 'balanced budget' while fighting for proper resources from the government, has been explained in previous TUSC documents (see tusc.org.uk).

But what is most needed is a will to fight - or to stand aside for those who have got the determination to do so.

TUSC groups should look to meet and begin to lay out plans to host a People's Budget conference before the end of 2021, to draw together the local set of demands and campaign issues to take to the council ahead of their 2022-23 budget-setting meeting, which will take place in January or February 2022.

After deciding on a date for the People's Budget conference, a plan of action should be discussed and drawn up to build for it, by contacting trade union branches, campaign groups, community groups, residents associations and so on, to take part - co-hosting if they wish, but certainly inviting them to contribute with their ideas and proposals for what is needed in the local area.

The council unions will themselves be examining the council's initial proposals for the 2022-23 budget, while many community groups with full or part-funding from the local council - or users of council-funded facilities or services - will be discussing their own finances and plans in the autumn period as councils start their budget consultations.

People's Budget campaigns can play an important role everywhere in organising a local fightback to the efforts the pro-capitalist politicians will make to pass the costs of the Covid pandemic onto the shoulders of working-class people. But in areas with local council elections next year - covering a bigger range of councils than in 2021 - they could be central in pulling together the broadest possible anti-austerity electoral challenge.