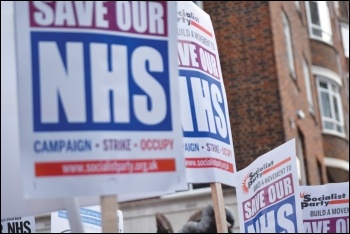 This was wrong. The white paper did not propose reversing privatisation nor deal with the crisis in social care. The government would divide the NHS in England into separate areas runs by boards called 'integrated care systems' (ICS). NHS England is already three-quarters of the way through its plan to create 42 ICS in advance of legislation to empower them.

The market mechanism first introduced under Thatcher, including its split between 'purchasers' and 'providers', will remain.

A new health and care bill is expected to be published shortly, having been flagged up in the Queen's speech in May. But that was vague on the detail. If the bill includes much of what was in the white paper, it will be a further threat to the NHS and must be opposed.

What confused the press was the suggestion in the white paper that the compulsory competitive tendering rules would be scrapped. However, it does not mean privatisation being abolished - just that companies would no longer have to compete! Throughout the pandemic the government handed out private contracts worth billions for test and trace, PPE, and to private hospitals. These have been without competition or transparency, and with a heavy element of cronyism - and that's the model they want to continue.

It is also proposed to remove the current requirement for the government's plans for the NHS to be debated annually in parliament.

Local councils, which would have their scrutiny over the NHS weakened in the white paper, are one of the 'partners' who will have representatives on the boards. But the current power of local authority Health Scrutiny Committees to refer bad local NHS decisions to the secretary of state would be removed.

In fact, rather than simplifying the structure of the NHS, the plans create two tiers of ICS in every area - one with the real commissioning powers and the other (also including private companies) which appears to be intended to act like the already existing 'health and wellbeing' boards.

Each ICS will have its own separate budget - bringing pressures to make cuts resulting from underfunding, and increasing the potential for regional inequalities in service. It also raises concerns about whether it would be used to weaken NHS workers' current national pay bargaining powers by replacing them with local bargaining.

All of this is of course not clear until the government publishes its bill. But one aspect that was mentioned in the Queen's Speech was to "innovate and embrace technology" and that "patients will receive more tailored and preventative care." Bland statements in isolation.

Campaign groups such as Health Campaigns Together and Keep Our NHS Public are opposing this bill. Despite quotes from Labour's Shadow Health Secretary, Jon Ashworth, saying that the white paper proposals meant "little accountability to the public, allowing contracts to be handed out to private interests with no challenge", Labour has shown no real fight against these proposals. If Labour was a real opposition, Starmer would be hammering it in every speech!