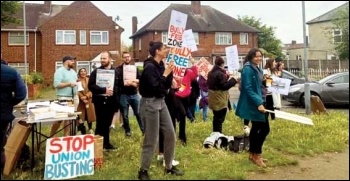 Tuesday 29 June saw the start of another three days of strike action by staff at Oaks Park High School – a large community school in Redbridge, east London, – over the victimisation of a trade union rep, and against a wider culture of bullying.

The picket was well attended and in high spirits, with strikers chanting: “Stop bullying staff” and “What’s disgusting, union busting!” and singing ‘Solidarity forever’ and ‘We shall not be moved’ accompanied by one of the reps’ trumpet.

The strike is visibly growing in confidence and cohesion. It’s been helped by pickets sharing harrowing stories of how the leadership of the school has bullied them. They are continuing to bully and intimidate staff to break the strike and deter more members from going out. Pickets told me that the school leadership is perpetuating lies about those who are out on strike and what the details of the strike are.

For the first time the picket even saw the presence of the police who reportedly were called in by the school management, falsely claiming previous picket lines ‘hurled verbal abuse and objects’. However, the officers were pleasantly surprised by the offer of cake and coffee from the picketers instead, much to the chagrin of the school leadership at the gates!

On Monday 5 July, 5pm, there is a rally planned outside Redbridge town hall in solidarity with the Oaks Park strike. Why isn’t the council intervening to end this bullying at a school which it runs?