Fight for a new workers' party 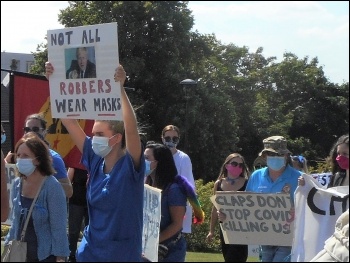 In addition, the U-turns continue. Ending legal restrictions would be irreversible, said Johnson. Irreversible was then changed to its opposite - reversible.

Meanwhile, Johnson urged everyone to be 'cautious'. Many people feel that their own caution and decisions can't be worse than those of the government. Even so, with Covid-19 - especially its variants - still too new for scientists to give categorical answers to many questions, the go-ahead for individuals to take their own precautions leaves many with unease or outright fear.

Socialists are at the forefront of fighting - in workplaces, communities, universities, everywhere - for measures that will help protect people from Covid. The Socialist has carried many articles, with more this week, showing our approach and some of the day-to-day demands we put forward. We argue for assessment and decision-making on the measures needed, led by trade unionists and other working-class representatives - democratic processes taking into account everyone's needs and views.

On a national level however, there isn't yet a mass workers' party in existence that could present a programme for national policies in the interests of ordinary people. The capitalist representatives in parliament today - in the 'opposition' parties as well Tory MPs - all tend towards one side or the other of a dismal 'choice' between ongoing compulsory anti-Covid rules that add to poverty and isolation, or the lifting of restrictions despite warnings from a layer of scientists of escalating mortality, more 'long Covid' cases and increased risk of variants.

Face masks have come under focus in that debate, due to a widespread and reasonable view that they are a sensible precaution. The capitalist politicians can't even be trusted on that issue, as the BBC's health correspondent, Nick Triggle, inadvertently indicated when he wrote: "Behind the scenes, government scientists are broadly supportive of the lifting of restrictions. But one area of particular concern is the policy on masks. Not because mask wearing in some indoor settings will dramatically alter the course of rising infections, but because of the message it sends out. The feeling is that it gives the impression infections no longer matter".

Elected representatives of a mass workers' party, armed with socialist policies, could start to end this travesty, through championing the need to nationalise big businesses, releasing their resources for the good of all. This would need to go along with democratically organised economic planning, enabling people's needs in a pandemic like Covid to be met, as well as in all other respects.

Analysis and editorials, NHS and health