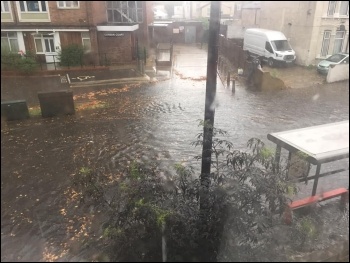 Just days after the images of floods devastating whole areas of Germany and Belgium filled our screens (see 'Flood devastation in Europe - Capitalism responsible for climate change and lack of protection'), the skies opened on 25 July, and the rain came crashing down across London and other parts of the UK. The capital was brought to a standstill - hospitals flooded, tube stations filled with water over a metre deep, roads became rivers, streets and houses were ruined.

Understandably, the discussion quickly focused on climate change, and this is an important factor shaping the unpredictability and severity of the weather. However, global warming doesn't entirely explain how a few hours of heavy rain could wreak havoc like this.

No rivers burst their banks here, the problem was surface run-off and inadequate drainage. The reason for this can be found in the chaos of capitalism.

The privatisation of all the old utilities, construction, highways maintenance, and almost all major services has led to devastating consequences. Firstly, services performed by private companies are cut in pursuit of profit.

Secondly, governance and standards that could improve the quality of work are removed in a hail of Tory euphoria eliminating 'red tape'. Finally, funding to all services is cut to the bone.

The evidence is all around us. As a kid growing up on a suburban estate in Essex, I remember vividly the huge noisy trucks that came regularly with their enormous vacuums to suck the silt and debris from the drains. I have lived in Walthamstow, east London, for a decade, and have never seen one.

Every facet of our lives has been privatised, which is why these flooding problems are linked to the lack of adequate housing, potholes in the roads, endless traffic, and the lack of health services.

We say bring back all the utilities, construction projects and services into public ownership with democratic workers' control and oversight. Bring back the standards and governance that ensure the quality of the work undertaken for the long term, not for private individual interests in the short term.