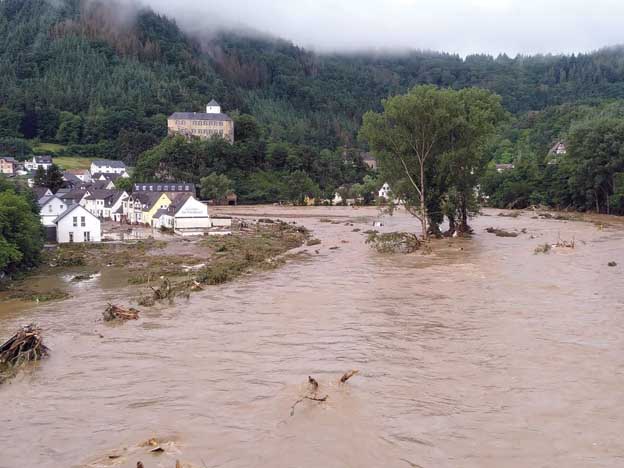 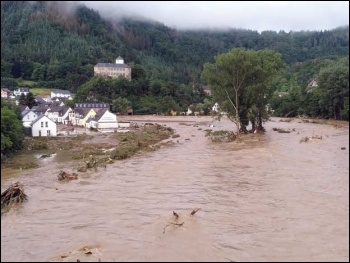 The flooded River Ahr in Altenahr, Germany. Such extreme weather events are becoming the norm under capitalism   (Click to enlarge: opens in new window)

Such ‘once in a lifetime’ extreme weather events are becoming frequent as global heating, caused by capitalism, produces devastating climate change. Indeed, Henan province in China has also recently suffered deadly floods, when a year’s rainfall fell in only 24 hours.

Immediate, non-bureaucratic measures must now be taken to help those affected and to repair the damage. No one must be left homeless, unemployed or without income, or fall into poverty as a result of this disaster. At the same time, there can be no going back to the ‘status quo’ after this flood. Climate change, which is ultimately responsible for such extreme weather situations, must finally be combated.

This flood will change the political mood in the country and the campaign for September’s general election. Possibly there will be larger demonstrations demanding action while the fight against climate change will gain renewed importance in the election debates.

It is possible that the Greens will benefit from the coming debates. But it would be wrong to place hopes in them. They have been complicit in environmental sins in various state governments (see ‘German Greens: The image and reality’ – socialistparty.org.uk).

In Baden-Württemberg, the state government under a Green minister-president is currently planning budget cuts of €250 million. But how they want to become the promised “climate protection state number one” with austerity policies remains their secret.

Despite all this, the world’s ruling politicians refuse to take serious action. Targets keep getting pushed back and weakened. They do this because pressure from profit-driven big corporations outweigh concerns about the impacts of climate change.

It is therefore necessary to react to climate change and to protect ourselves. All areas of society – including urban and transport planning, as well as workplaces – must be put to the test with regard to necessary protective measures in the interest of the working population and the socially disadvantaged.

“There were alerts going out… saying there’s some very serious rain and floods coming: ‘be aware’. It’s then for the national authorities to take that information and go with it.”

She added: “We should not be seeing this number of deaths from floods in 2021. It’s just unacceptable. There’s something going wrong with the system.”