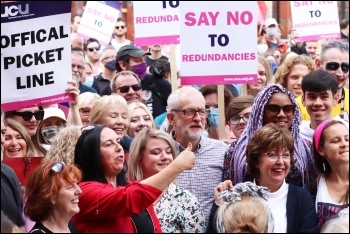 University workers at the rally. Photo: Tommy   (Click to enlarge)

As a result of previous strike action and protests, negotiations between the union and management have successfully reduced the number of compulsory redundancies to two, proving that collective action can save jobs.

The latest ten days of strike action, which finished on 14 August, were to save the remaining two jobs - victims of the university's 'shake up'.

Management had initially hoped UCU members would suspend the strike. However, they misread the strength of the workers' solidarity, and their determination to fight for every job. At a special meeting, 97% of attendees voted to continue the strike.

Among the speakers in attendance at the rally, was former Labour Party leader Jeremy Corbyn who said: "In winning this campaign to defend those jobs, you will stop a university going after the cleaners, the catering workers, the contractors and all the other workers in the university. You're showing solidarity with all of them. You will also be giving a message to the university and further education sector all across the country that where the Tory government comes after working-class jobs and living standards with a new face of austerity, we're here, we're ready and we are fighting back."

The higher education sector has been destroyed by decades of marketisation and austerity which must be fought. By saving forty-five jobs so far, this UCU dispute in Liverpool has proven the power of the organised working class.