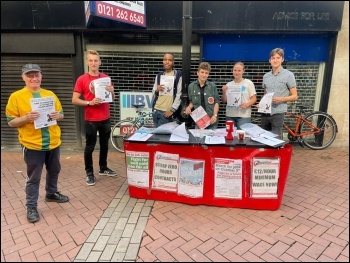 Socialist Students have received an enthusiastic response from students at Birmingham City University and its neighbouring colleges. Setting up our campaign stall outside the welcome fair, many young people passing by were visibly lit up when they saw there was an active socialist group on campus.

62 students signed up to receive more details about our meetings and campaigning activity - including the local 'march for jobs' we're organising in October. Nine people attended our first meeting, with a lively discussion about a range of topics. Everyone there walked away with a copy of the Socialist.

At our campaign stall on 17 September we focused on the needs of students today, and building a Socialist Students society on campus. 18 students left their contact details. South East London Socialist Party is organising regular meetings and activities on campus to channel the frustrations of students into effective action.