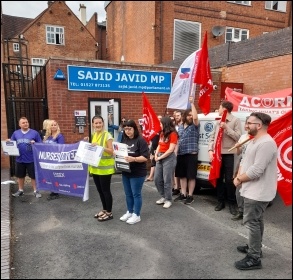 On Saturday 12 September, I spotted in the Bromsgrove Advertiser that a Nurses United protest was taking place in Bromsgrove at Tory Health Minister Sajid Javid's party office. That was it; down I went to be met by the best and liveliest protest in the town for a long time. Nurses travelled from Essex, Northampton, Lincoln and Brighton. Local nurses and retired nurses turned out as well, plus Acorn activists and a Socialist Party member from Birmingham.

They were a brilliant, inspirational group, and are up for the fight for fair pay. The 15% demand was prominent. Nurses United had written to Sajid Javid but without reply. Some activists went into Wetherspoons and got the public to write their views about the NHS on placards, which were then left for Javid to see.

On 17 September, local nurses went to Javid's office again, but there was no reply.

We moved to the high street, including four of us from the Socialist Party, where we helped distribute their leaflets. We got a great response from the public and gratitude from the nurses for bothering to help.

When two of the nurses returned to their cars after the stall, they saw a police presence outside Javid's office. There'd been no hint of trouble at either protest, but it seems the Tories thought more about getting police there than meeting nurses.

We are now planning more high street activity with the local nurses and other activists.