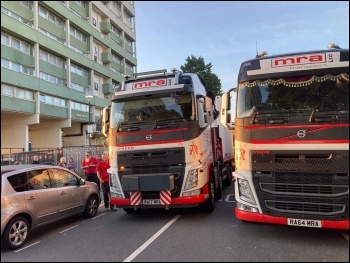 On 23 September, the Socialist Party and Waltham Forest Housing Action Network in east London responded to the call from tenants at John Walsh and Fred Wigg towers to help them keep their car park.

Refurbishment contractors want to take the tenants' car park for their shipping containers to carry out their work. They had no regard that the people who live in the blocks need their cars for work.

The tenants are the ones who have fought for these refurbs for over a decade, while the council has flirted with various guises of privatisation for the blocks. For nearly ten years residents have defeated these privatisation plans, with the support of the Socialist Party.

The Flats - a vast area of common land - sit behind the tower blocks. Tenants point out that this could be used for the shipping containers. This has been dismissed because of the cost, even though various multinationals were allowed to use this space during the London 2012 Olympics.

Residents proposed free parking in the streets surrounding the blocks for those from John Walsh and Fred Wigg. Again they were ignored.

The contractor informed the tenants the shipping containers were coming, end of. But these tenants have a history of being organised.

They put a call out to protest and block the shipping containers from taking the space. The Socialist Party turned up at 7am to support them.

The lorries carrying the shipping containers were getting stuck in narrow residential streets. The authorities promised permits for tenants who need them, one of the demands that was dismissed when the tenants originally asked. The battle is on to make these promises cast iron.

We are also asking tenants to join the anti-austerity electoral challenge to the useless Labour councillors in May 2022.