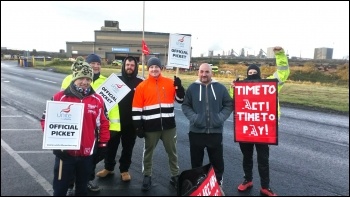 "I've worked here eleven years and only ever had one pay rise", one scaffolder told me on the picket line. Another added: "That was three years ago but was self-funded!"

That's why around 60 scaffolders, members of Unite the Union, started an all-out strike on Monday 4 October at British Steel in Scunthorpe. They are striking for the national industry NAECI rate for the job, which is 10-15% more than they get paid now.

This dispute started two years ago and the scaffs took several days of strike action against their previous contractor Brand last winter. A pathetic 6% pay rise over two years is all that's come out of months of 'non-negotiations' with new contractor Actavo. But the scaffs want the NAECI rate that's paid to others at the steelworks. And they're fed up of being fobbed off, hence the 95% vote for an all-out strike. Picketing has been stepped up to all three main gates from 5.30am to 2.30pm. Encouragingly, on the first morning, several scaffs from other firms turned around at the picket or didn't come in. As the Actavo contract maintains around 500 structures on the steelworks, the scaffs don't expect it will be long before their action really begins to bite.