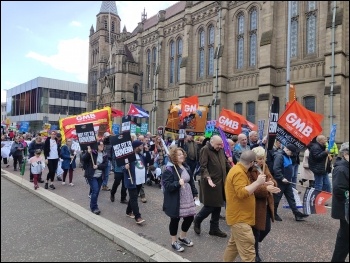 The Socialist Party was part of the march to show disdain for the Tory party at their annual conference in Manchester and demand change. 2,500 attended from the trade unions, Black Lives Matter and Kill the Bill.

The Socialist Party had campaign stalls along the route. We distributed material and sold the Socialist.

Our leaflets called for an end to capitalism, spearheaded by the Tories, and called out Keir Starmer's Labour for failing to oppose Tory austerity. Hundreds of our leaflets were given out to marchers and passers-by, getting out our message to end this rotten capitalist system, and showing support for the Trade Unionist and Socialist Coalition (TUSC).