Tories under fire over sleaze and rising prices 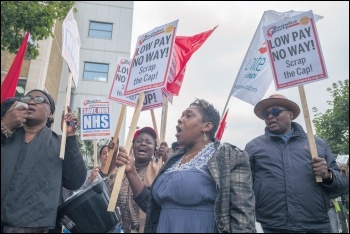 A public sector strike on pay is brewing. And is it any wonder?

Fuel and food prices are rising, the Tories are putting national insurance up, they've cut Universal Credit - and most public sector workers have seen effective pay cuts of around 20% over the last ten years.

Meanwhile, arrogant pro-big business MPs are wallowing in sleaze, their snouts well and truly in the trough. The rich have got obscenely richer during the pandemic. Some of them are so rich they have decided to spend their ill-earned stash extending their playground into space.

Yet it was working-class people who saved lives and kept society functioning through the pandemic. It was nurses, bin workers, bus drivers, care home staff, cleaners and supermarket staff who were the essential workers, not bosses and bankers. It's lorry drivers and warehouse workers who once again have proven to be essential in the shortages crisis.

No wonder over the summer health workers in four different unions all voted in consultative ballots to reject a measly 3% pay offer. They're now balloting again. Unfortunately, in Unison and Royal College of Nursing it's another consultative ballot, but in Unite and GMB it's a ballot for action. It’s no wonder that local government workers demanded off their leaders that they are balloted for action - a vote that will start in December.

The pressure will mount again now on the leaderships of the National Education Union and civil service union PCS to join in and mount a serious fight.

Feeling the pressure, the Tories announced the end of the public sector pay freeze next year. But that's too little too late, with no extra funding promised, and a pay cut still likely to be on offer next year. If anything, that announcement should give workers more confidence to fight.

And don't let the capitalist politicians and media tell us it's not fair because workers in the private sector are worse off. The gap isn't as big as they claim. And if low-paid workers like cleaners in public services hadn't been privatised, the gap would be even less.

But more to the point, a fight in the public sector can raise everyone's sights, and boost everyone's fight for decent pay. The best way to make sure pay is fair across private and public sector is for us all to stand together!

And if there's one bit of news we want everyone to know, it's that tanker drivers in Liverpool, part of Unite, have just won a 17.5% pay increase.

It can be done! Let's fight together for a pay rise.