Editorial of the Socialist issue 1155 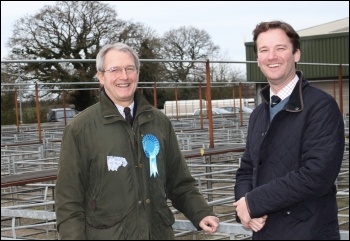 "Is anybody in charge at No.10?" This was the headline in the normally Conservative-supporting right-wing Daily Mail as Tory MP Owen Paterson resigned after Boris Johnson's latest U-turn.

Paterson faced a 30-day parliamentary suspension after the standards committee found him guilty of taking £100,000 from two companies for lobbying. Johnson's response was to propose a new alternative committee that would be chaired by his wife's former boss, with an in-built Tory majority!

Johnson won the vote, after allegedly threatening to withhold funding from areas represented by Tory MPs if they voted against. But his 79-strong majority was slashed to just 18. It has been reported that furious Tory MPs were going into the voting lobbies in tears. But rather than some principled objection, this has far more to do with realisation of the storm of outrage to come.

The result is that instead of one of Boris's mates having a month out of the Commons, a Tory MP is forced out and Johnson's government has becomes mired in a row over sleaze. Some capitalist commentators have claimed that Johnson was motivated by the fact that he is next in line for an investigation by the standards watchdog over the extravagant refurbishment of his Downing Street flat, allegedly to the tune of £200,000. This would be the fourth time in the last three years that he was under scrutiny - more than any other MP.

This is entirely possible. But his actions were also a reflection of the arrogant overconfidence of the Tory government, and Johnson personally, unchallenged as they are by Starmer's New Labour. Before the recent spending review, Labour's Blairite shadow chancellor Rachel Reeves opposed tax rises not just to "people" but to "business" too.

Even now, the Tories may feel they can ride out what they hope will be seen by ordinary people as 'parliamentary intrigue'. But what has added dynamite to these events is the deepening cost of living crisis facing workers and their families, and some from middle-class backgrounds. This is behind the Tory splits that have come back to the surface, reflecting the frustration and suspicion of the capitalist establishment who, in the main, never wanted Johnson as their prime minister and have struggled to control him.

Margaret Thatcher thought that she'd dealt with the opposition of Neil Kinnock's Labour and the union leaders after the defeat of the miners' strike, but complacently slumbered into the poll tax, which ultimately brought her down after Militant, the predecessor of the Socialist Party, played the leading role in organising a mass non-payment campaign involving 18 million people.

Similarly, Johnson's sleazy government, overriding rules that don't suit, can face the fury of millions of workers. The events of the last few days are a continuation of decades of parliamentary sleaze, involving not just the Tories but the other pro-capitalist parties too. But when workers are facing fuel increases of 10p a litre in one week, Johnson's bumbling defence of more Tory sleaze isn't so amusing.

We are seeing a rising tide of strikes by workers - either facing down the brutal attacks like 'fire and rehire' or demanding pay rises to keep their heads above the water of price rises. Many of these disputes are resulting in significant victories - some before action is taken, such as the 17% pay increase by Liverpool tanker drivers.

The excellent 53% turnout by UCU members in higher education means that significant industrial action to defend their pension rights is on the agenda (see page 12). It shows that the ballot for strike action in local government against the miserly 1.75% pay 'rise' - effectively a cut as real inflation rises towards 5% - can also be won, as well as the fully justified 15% pay claim for NHS workers, fighting to win both statutory and indicative ballots. With a decisive lead from the union leadership, a public sector-wide strike over pay could be a real possibility.

The somersaults and U-turns this week and previously show that, despite his populism, Johnson's government, like all Tory governments, puts the bosses' profits before the interests of workers. And a government led by Starmer's Labour Party would do no different. The fight in the workplaces must be stepped up, along with the struggle to build a new mass political alternative that can take on the Tories by fighting on a socialist programme that offers a decent future to workers.

A workers' MP on a worker's wage

In the wake of the Tory sleaze crisis, Dave Nellist, former MP, national chair of the Trade Unionist and Socialist Coalition, and Socialist Party member, was interviewed on Jeremy Vine's Radio 2 programme about whether it's OK for MPs to have other jobs. Below are extracts from that interview. The whole thing can be found on YouTube.

Jeremy Vine: You don't think they should have second jobs at all?

Jeremy Vine: When you were in the Commons in the early 80s you would only take a living wage or a worker's wage?

Dave Nellist: In my local Labour Party we looked at the wages in the ten biggest engineering factories in Coventry and averaged the skilled rate, which was a bit over 40% of an MP's wage. And for nine years in parliament that's what I took. My partner Jane wasn't working for the majority of that time and we had three children. So I like to think that we weren't isolated or insulated from day-to-day problems like MPs on three times the average wage are.

Jeremy Vine: What about the argument that we need 'men and women of the world', and the best way for them to be that person is to work for someone else?

Dave Nellist: The majority of men and women of the world are HGV drivers, nurses, cleaners, and I'd like to see a lot more of those in public office. I don't want to see the lawyers and company directors we have today, who once they get in there are looking for ways to make money on the side.

In the 80s there was one Tory MP, Geoffrey Rippon, who was a QC and had 63 other jobs! That sort of thing was so rife in the 1980s, and I don't think it's fundamentally changed today. I can remember Labour MP Dennis Skinner referring to Tory MPs on the other side of the chamber as the 'honourable member for Barclays Bank', or whatever company they happened to represent.

We don't have transparency and accountability. So in the last eighteen months during this pandemic loads of companies linked to Tory MPs have been allowed to get billions of pounds of PPE and other contracts. That's the reason these MPs are really there, not to represent ordinary people.