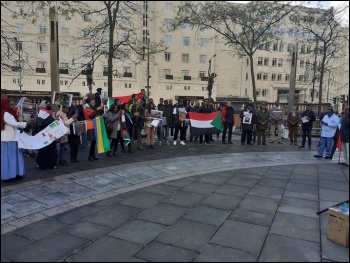 Chanting "down, down, Al-Burhan", over 100 people from Leeds' Sudanese community rallied on 13 November in support of the mass protests taking place on the same day in Sudan. The protest condemned the military coup led by Al-Burhan, right-hand man of the former dictator, Al-Bashir, whose 30-year rule was overthrown in 2018 by mass struggles.

The protesters welcomed the support of a Leeds Labour councillor, Abigail Marshall Katung, to the protest. However, she asked protesters to put their faith in British MPs persuading the military that they should go back on their 'illegal' coup, as well as encouraging protesters to keep "peace and reconciliation" as their goal.