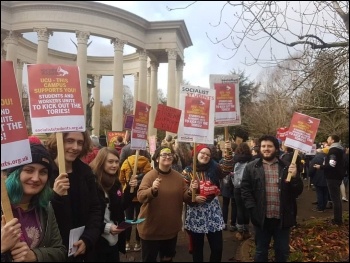 Ten university vice-chancellors earn over £400,000 a year. As a second year university student paying £9,250 a year, I would like to think the money is being put to good use giving me the best possible quality of education. I realised my expectations were a little naïve when I learned how grossly overpaid university bosses are - earning ten times as much as the average member of university staff. It turns out a lot of the funding for universities just goes into the pockets of those at the top.

Meanwhile, students' learning conditions are being squeezed, and staff pay and pensions are under attack. Sheffield Socialist Students recently welcome a representative from the University and College Union (UCU) to one of our meetings to explain the developing university strikes.

In two ballots over pay-related issues and pensions, workers have supported strike action, with over 70% of members backing action in both disputes. Staff at 54 universities will now be able to take industrial action over unfair pay and working conditions. Staff at 37 universities have backed strike action over pension cuts. At the time of writing strike dates have yet to be announced.

Since 2009, university staff's wages have fallen 20% in real terms effectively meaning they have received a pay decrease, which is unjustifiable, especially when compared to the university bosses' over inflated pay increases. A recently published report also showed that almost a third of university staff feel emotionally drained from work every day following a mental health and workload crisis in universities.

Socialist Students will be right behind university workers taking action. It is the university bosses and the government to blame for overcrowded lecture theatres, rip-off fees and attacks on staff pay and pensions.