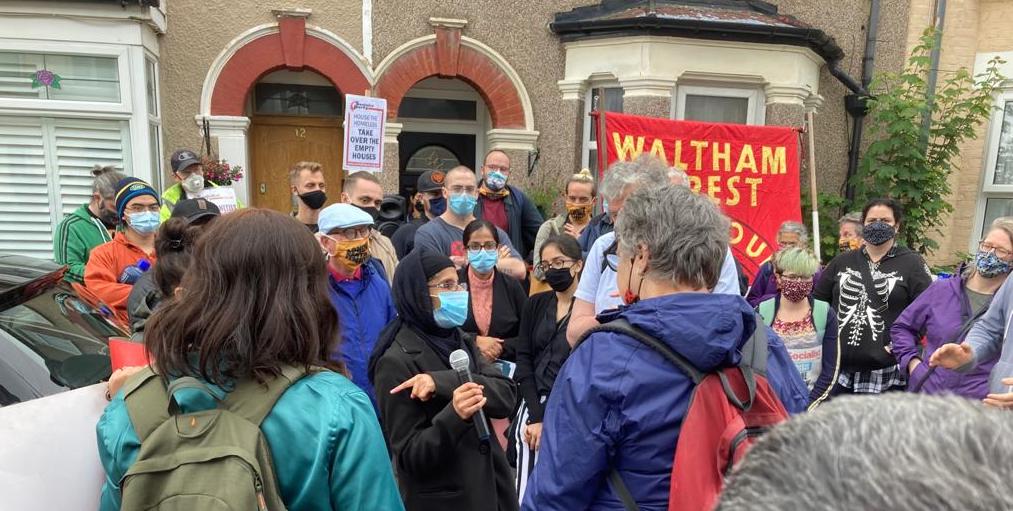 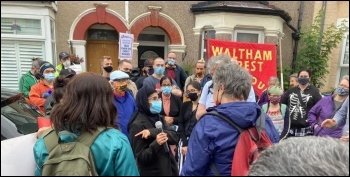 Already twice we had stopped Waltham Forest resident Nadia Zaman from being evicted (see ‘Fighting for a home for Nadia and homes for all’ at socialistparty.org.uk). In June, 80 ‘bailiff busters’ kept her in her home. In August, we organised a two-day picket of her new house to prevent her from being evicted by the council.

She was facing eviction again, this time from the place that social services had housed her.

Waltham Forest Housing Action Network, set up by the local trades union council, organised a lobby of the council’s children and families committee. We applied to speak on an item on the agenda.

Three Socialist Party members spoke. We called on the councillors to immediately step in and stop the eviction of Nadia and her children.

You can watch our speeches on the ‘Waltham Forest Socialist Party’ Facebook page.

Nadia was subsequently sent an offer of a house an hour away in Rainham in Essex. It was listed as £1,400 a month.

But even as she was viewing it, the price was going up. By the end of the day, the price had jumped to £1,500 a month.

On our Socialist Party campaign stalls, we highlight Nadia’s case to people. She is now known in our area.

She is known because she typifies what is happening to working-class people. If you fall on hard times, there is no council housing safety net, because it was sold off, and the stock was not replaced. The flats being built are out of reach to people like Nadia.

The council tell people to go and rent privately on the open market, but Nadia’s case shows that letting agencies don’t want people on benefits. They ask for a guarantor, something that many people can’t get.

The Labour councillors have not fought Tory austerity. This has led them to policies that see community assets as something to make money out of. They see themselves as directors in companies, flogging off land, buildings and skylines in order to generate income, rather than fighting for more money from central government.

This means they literally have a policy of social cleansing the poor. They can’t solve the problem, so they force working-class people out.

Some Labour councillors have even gone on to work in property development, like Clare Coghill, former Labour leader of the council.

Nadia had been told to leave by 23 November. But now we think that we have won a temporary extension until 26 January.

This would be fantastic. It would mean Nadia has Christmas with her kids. It’s a vindication of our campaign against her eviction.

But obviously this temporary reprieve is not secure. Her housing is temporary, and this would only be an extension. We need to be constantly ready to defend her.

Nadia will be threatened again in January with being forced onto the streets. We will be calling on the community to defend Nadia again, this time in their hundreds, if not thousands.

We encourage Nadia, and others in a similar situation, to stand for council in May 2022, under the Trade Unionist and Socialist Coalition (TUSC) banner. We are standing on a pledge of no more evictions, no more Nadias. We say build and acquire more council houses, cap rents and set a needs budget so we can fight for the money this area so desperately needs.