Link to this page: https://www.socialistparty.org.uk/articles/33430 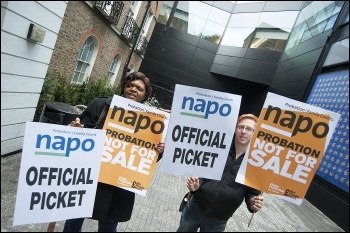 Probation staff in the Napo trade union have made their anger clear at the insulting pay freeze. Recently, members rejected the pay offer by an outstanding 99% and with a very encouraging turnout. Then at Napo's 2021 annual general meeting, a huge majority of attendees backed two motions calling for ballots for industrial action if the pay freeze remained.

On the back of this and with the pay freeze firmly in place, last week Napo's national executive committee (NEC) met to discuss the next steps of the pay campaign. The result was most of the NEC voting for the general secretary's recommendation to ballot the membership on lodging a formal trade dispute with the employer, and reserve the option of balloting for industrial action.

This will likely deliver a firm result in favour, but I couldn't support it because the recommendation represents the leadership backing away from supporting a ballot for industrial action at this time. The general secretary among others expressed doubts about balloting for industrial action, saying first that they did not think Napo could get the turnout, then adding that even if we did the Tories just will not budge. Bizarrely among those holding this view was the national chair who proposed one of the previously mentioned motions at AGM!

Napo's leaders fear they face a loss similar to the one dealt when the union opposed the part-privatisation of probation. But just seven years on we are in a different era. They do not acknowledge the great victories that have been won by trade unions in this period. In the NEC debate, I gave the example of the NEU forcing the Tories back on the early unsafe reopening of schools at the start of this year. Also, the Socialist is reporting fights and wins in the public and private sector every week, particularly on pay as the cost of living soars past 6%. Working class militancy is growing.

Unfortunately, there is a real danger that this retreat - and it is a retreat however it may be dressed up - will be noticed by the active layers in Napo, not least the hundreds of members who attended AGM and the branches who proposed motions backing a campaign involving strike action. In avoiding the risk of a ballot failing to win, Napo's leadership have invoked the risk of demoralising the members partly because the democratic decisions of AGM itself are being undermined. A window of opportunity to build the fightback is rapidly closing. A trade dispute is a fight between classes but without the weapon of strike action readily available the union is weaker from the start.

However, the NEC decision has been made. Now, the agreed ballot should be called as soon as possible. If, as we hope and will campaign for, that delivers another clear vote and strong turnout, then a meeting of the NEC should be called to discuss a plan to build a campaign for industrial action.

Napo's branches should submit motions to the NEC backing a cross-union campaign for industrial action in probation and across the public sector to break the pay freeze. Already, UCU members are on strike in higher education and there are industrial action ballots happening in local government and the NHS. Such a call by members would reiterate to Napo's leadership and the whole NEC that the members are prepared to fight if given a lead.

This version of this article was first posted on the Socialist Party website on 2 December 2021 and may vary slightly from the version subsequently printed in The Socialist.