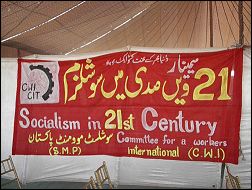 The turn-out was not very high, as the WSF was not very well
organised and not really aimed at the wider population.

NGOs (Non-Governmental Org-anisations) dominate the event. And while
there are some trade union leaders present, there are few rank and file
workers. The entrance fee of 100 Rupees, is partly to blame (low paid
workers, on average, get paid about 3,500 Rupees a month, in Pakistan).

The Committee for a Workers’ International (CWI) was present with
about 50-60 members from all over Pakistan and Kashmir and international
visitors. The CWI participation was different to most of the other
organisations attending. We are not an NGO but a political group
defending socialist ideas.

We held two meetings. The first one dealt with the fight against
imperialism, the war in Iraq, and workers’ struggles in Europe. It was
introduced by Geert Cool, from Belgium. About 100 people were present.
Amongst them were leaders of a newly-formed postal workers’ trade union.

The CWI meeting was very successful. CWI comrades from Pakistan and
Kashmir were impressed by workers’ struggle in Europe. After the
meeting, an Indian television station did an interview with CWI members.

This postal workers’ union held a meeting on Friday evening, at which
Kevin Simpson from the CWI spoke against privatisations. Kevin’s speech
was broadcast on local television.

A second CWI meeting on ‘Socialism in 21st Century’ attracted around
150 people, making it one of the most successful meetings at the WSF.
The CWI explained how capitalism does not provide for the mass of
working people, and why we need a socialist alternative. This led to
some discussion, mainly amongst visitors from India.

The Socialist Movement Pakistan (CWI) stall at the WSF attracted many
visitors. We sold an Urdu translation of the Communist Manifesto, and
also CWI pamphlets on Che Guevara and on Venezuela. Many of these
pamphlets were sold at the stall.