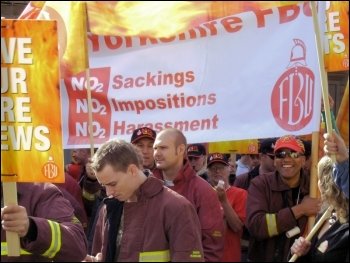 Firefighters across the country are facing a plethora of attacks on jobs, services, conditions and pay. These attacks are being carried out by bullying management, who seem to show little interest in how they will affect the fire service's ability to protect the public. But Fire Brigade Union (FBU) members are determined to fight back and the union is currently involved in a number of regional struggles.

In South Yorkshire and London, fire authority management are attempting to impose changes to contracted hours. This would both weaken the fire service's ability to effectively respond to call-outs and have a hugely detrimental effect on firefighters' home lives. FBU members have been involved in work-to-rule action against these impositions.

At the same time, in South Yorkshire the union drew up alternative proposals for a change to a ten-hour day shift. Rather than effectively engage with this attempt at conciliation, management have issued redundancy notices to 744 firefighters which will be implemented if they do not sign up to new contracts by January 1 2010!

South Yorkshire FBU members have voted 83% in favour of strike action against these redundancies and were buoyed by a rally of over 2,000 FBU activists a few weeks back. FBU members across the country realise that the struggle taking place in South Yorkshire is a struggle for all firefighters - the way that management attempted to dismiss the FBU's proposals and now the draconian sackings that are threatened could set a dangerous precedent. 24-hour strikes have now been announced for 19 and 23 October.

In other regions fire authorities are lining up cutbacks that could see services slashed and the public burn! Warwickshire fire service plans to cut a third of all fire appliances, closing seven fire stations. This could see the loss of around 100 retained firefighters.

In Essex, cuts will mean fire stations don't have enough staff for the number of fire vehicles that they have! Management justify this by claiming that 'statistically' it is rare for all vehicles to be called out at once.

Management are also attacking and vicitmising union activists. But FBU members won't stand for this. The sacking of a union activist in Merseyside has resulted in a successful ballot for strike action demanding reinstatement.

In the face of the biggest economic crisis for generations, the establishment parties are all attempting to outbid each other on who will cut public services the most. The fire service will not be exempt from these swinging attacks.

This crisis was not of our making and we should not pay the price! How many firefighters were on the board of directors at the Royal Bank of Scotland?

Fire authorities and the government know that their attacks will provoke a response from trade unionists. They are lining up an army of scabs. AssettCo, which already holds PFI contracts on fire service vehicles worth tens of millions of pounds, has been awarded a contract to supply strike coverage.

Rather than putting millions into private hands for under-trained scabs, this money should be used to provide a fully publicly owned and funded fire service, where FBU members don't feel forced to take action.

But if fire authorities continue as they are, nationally coordinated action will be vital in defending jobs, pay, conditions and services. These are struggles that all trade unionists must back to the hilt.