From The Socialist newspaper, 13 January 2010 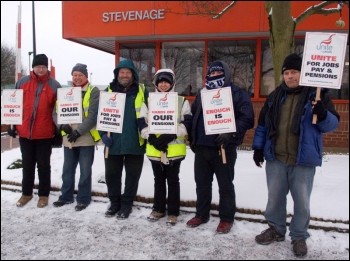 Fujitsu workers, members of Unite, on strike in Stevenage, photo by Guy Smallwood   (Click to enlarge)

I spoke to Trevor Palmer, the local workplace rep at Fujitsu Stevenage when I visited the picket line on 11 January. He said their dispute is centred around three issues - pay, pensions and redundancies. The company cancelled bonuses in 2008 and then announced huge profits. In March 2009, the company cancelled the pay review at the last minute then tried to compensate with a 2% bonus last year.

The company's final salary pension scheme was closed to new applicants in the year 2000. This has resulted in a loss of guaranteed income. Then last May they proposed to close this scheme, affecting the 4,000 people still in it. The company then announced 1,200 redundancies last year.

A ballot for industrial action took place with overwhelming support from union members. Fujitsu is using a climate of fear to push through an attack on pay and conditions on its workforce. However the campaign to fight back has resulted in an increase in union membership and a reduction in the number of compulsory redundancies. 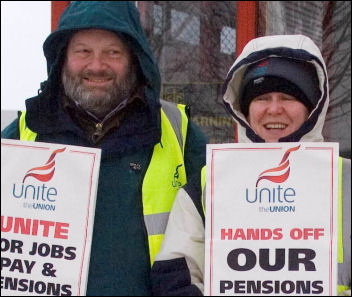 Fujitsu workers, members of Unite, on strike in Stevenage, photo by Guy Smallwood

This is the first national dispute taking place in an IT company and workers on the picket line were in a buoyant mood. Their demands are for proper pay negotiations to take place with Fujitsu resulting in pay increases, including a minimum pay rate, as well as equal pay for the job, stop the compulsory redundancies (now standing at 100) and re-start negotiations on the issue of pensions.

One of the pickets told me: "I felt that the introduction of a company wide bonus system back in 2004 was another method by which the company could hold down real salary increases. Every time the company asked its employees to understand their position and to be reasonable, the employees did but the company responded unreasonably. Very much give and take - employees giving and the company taking!

"We were asked to understand why the company could not afford to pay bonuses in 2008 because of losing the NHS contract and how they wanted to pull all of the impact of this into one financial year and draw a line under it. We weren't happy but it sounded reasonable so we accepted it.

"In February 2009 we were being told that our financial position was strong, then in March 2009 very unexpectedly they cancelled the pay review - despite managers having all completed the pay planning - the economic downturn was blamed and we needed to keep our costs down to protect the business. Many employees weren't happy about it but thought that at least this would secure their jobs!

Six months later in September half the workforce was put at risk of redundancy.

"A similar attack has been made on the final salary pension scheme. First the company closed it to new members, this didn't make sense to me at the time as surely the number paying in would eventually dwindle away to nothing, just at the time when the majority would actually be claiming the pension but I'm not a pensions expert!

"Then not that long after that, they were worried about the pension funds so gave us three options to chose from. One showed how our figures would change if we increased our retirement age from 60 to 61 and an option on the form was to increase retirement age.

"I tried warning people that the change might not just be a year. The majority voted for the option to increase our retirement age but the company changed it from 60 to 65!

"We weren't happy but at least this was going to save our final salary scheme and we would be alright in our retirement. But in May last year the company proposed the closure of the scheme.

"There comes a time when you can't afford to continue being reasonable and you have to say enough is enough - this is why I'm striking - I can't afford not to at the rate that the company is attacking my pay and conditions!"

The first national strike in the IT sector began at Fujitsu on 18 December, and continues with five more days of strike action, as well as action short of strike.

Staff are sick to the back teeth of the company taking them for granted. For the last five years workers have received below inflation pay rises and this year the pay review was cancelled and their pay frozen.

I visited the picket line in Wakefield, where six pickets braved the chilly weather. One of the reps told me that the company has begun to move, but nowhere near a serious attempt to meet the workers' demands.