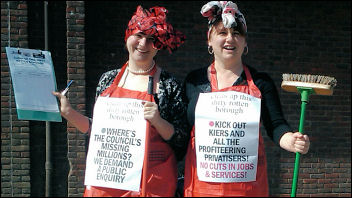 The present 'rotten parliament' will end in three weeks. But the MPs whose corrupt fiddling of their expenses have earned it this title are still desperately trying to cover up the extent of their venality. They have prevented their bar and restaurant bills from being published until after the general election.

The sordid details of their carousing would outrage workers whose jobs and services are going to be decimated after the election and who will be forced to put off their retirement. Young people who can't get a job or whose university places are being cut would also be disgusted.

Socialist Party election candidates are standing as part of the Trade Unionist and Socialist Coalition (TUSC). They aim to build a workers' alternative to these pro-big business politicians who are only interested in filling their pockets at our expense, while bailing out a financial system that has enriched a tiny minority in society to unprecedented levels.

Our candidates pledge to only take the wage of a worker if they are elected. Unlike other politicians we stand by our pledges - as was shown by present Coventry Socialist Party councillor and parliamentary candidate Dave Nellist when he was a Labour MP in the 1980s and 1990s.

A common response that Socialist Party canvassers are hearing on the doorsteps is 'all the parties are the same'. One Labour candidate has even copied the election leaflet of his Tory rival!

But the Socialist Party is different. We stand for an alternative to this rotten system and its rotten representatives - a socialist system where the needs of ordinary people are the priority and the wealth of society is democratically planned and used for the benefit of all.

If you support our ideas then we need you to support us financially. We depend on your contributions and donations and we can guarantee that every pound will be used to build a fightback and to put forward a socialist alternative to the future of misery and insecurity that is all that capitalism can hold out for us.