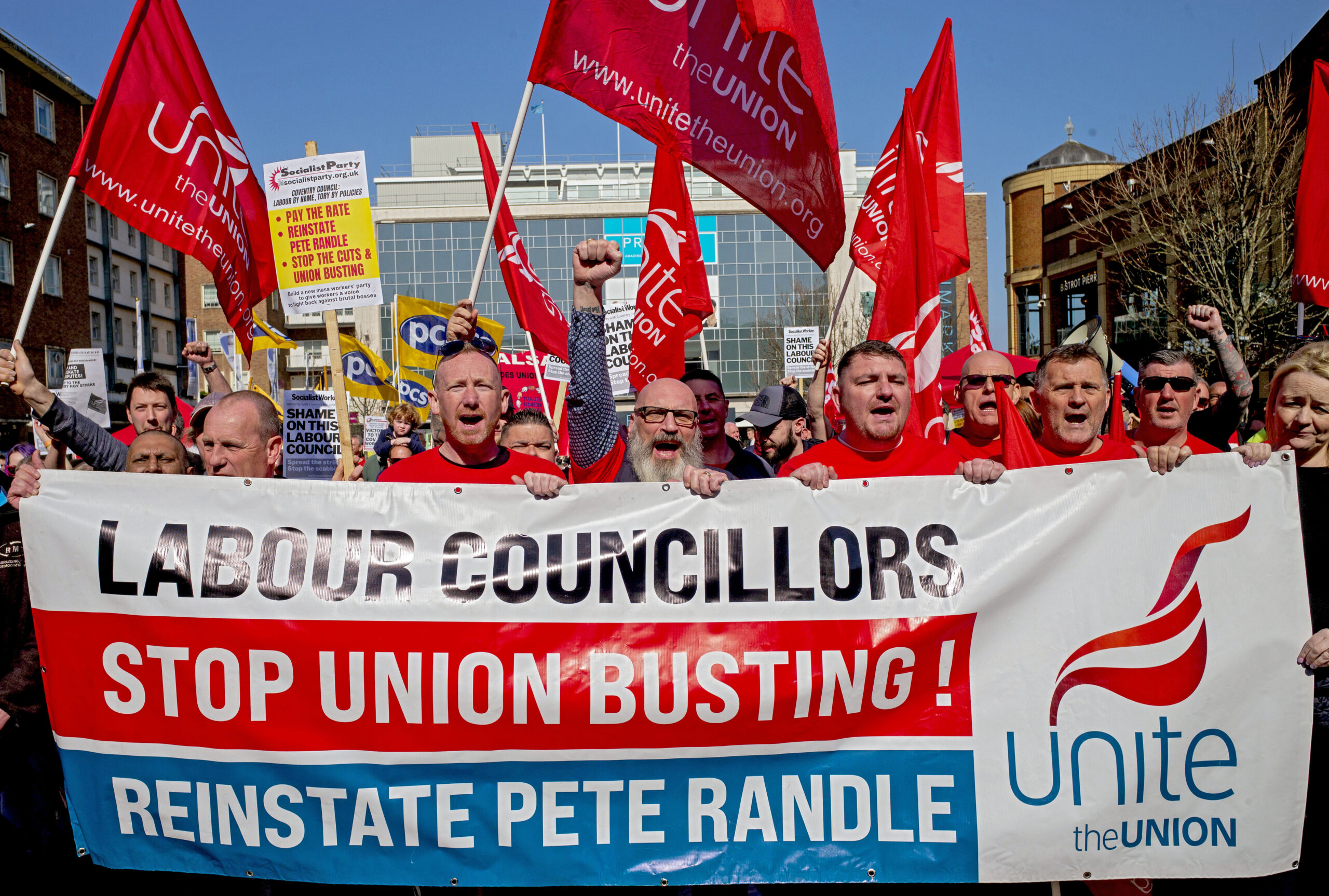 “We are not lambs in your hands. You’ve created a pack of wolves and when you come for one of us, you come for all of us”. Those were the words of a defiant striking driver addressing the Coventry Labour council on 26 March.

Hundreds of protesters, from across the trade union movement, travelled into Coventry city centre in support of Coventry’s striking Unite bin lorry drivers. These workers have been taking all-out strike action since 31 January over pay, against a Labour-run council determined to break the union.

Among the speakers was Unite General Secretary, Sharon Graham. She announced the suspension of Coventry’s Unite-member Labour councillors from the union saying: “You won’t be getting your hands on any of my members’ money for your elections in May!”

Coventry council has slandered the drivers for months, brought in scab workers on more than the drivers are even asking for, and suspended rep Pete Randle in a blatant act of trade union victimisation. The council has now cost the city around £3 million trying to break the strike.

Socialist Party members came in force from across the country to support this important protest, recognising its political significance. Coventry council’s actions lay bare what the Labour Party has become, rotten to the core with right-wingers and anti-worker careerists leading it.

Socialist Party members were busy throughout the demo, handing out our latest strike bulletin to protesters and discussing it. We called for an electoral challenge to Labour as a step to building a new mass workers’ party.

A number of striking drivers have torn up their Labour membership cards; some have said they will help build a socialist challenge in Coventry by supporting Trade Unionist and Socialist Coalition candidates in May’s local elections. Some striking workers have already joined the Socialist Party, and we came away from the protest with a bundle of names of Coventry workers and youth who want to join.

In her speech as president of Coventry TUC, Socialist Party member Jane Nellist pointed out the strike was already inspiring other workers to fight for the wages they need. She added that “capitalism is incapable of meeting all our needs. That’s why we fight to change our society along socialist lines so that the wealth is used for the majority, not the few”.

She also recalled the reputed dying words of Coventry socialist Tom Mann: “Tell the comrades to be of good courage, go on with the work”. After this fantastic protest, the Socialist Party and the striking workers will certainly be doing that!

Unite suspends anti-worker councillors – take them on at the ballot box too!

Coventry Labour councillors, by attacking striking union members, deserve suspension from their union, Unite, and more. Unite General Secretary Sharon Graham’s announcement will be applauded by trade union activists up and down the country who have faced over a decade of attacks from Labour and Tory councils.

Pressure will grow on Unite, and other Labour-affiliated council unions Unison and GMB, to consider whether Labour councillors are acting in members’ interests, and what action should be taken against those that don’t.

Labour councillors have a choice: they can adopt Unite’s policy of setting no-cuts budgets to defend jobs and services, and address the cost-of-living crisis their workers face by paying a decent wage. If they fail to do so, or attack workers who stand up like they have in Coventry, then they should not just be suspended by the union, but be unseated at the ballot box too. That’s why the Trade Unionist and Socialist Coalition, of which the Socialist Party is a constituent part, will be standing candidates in the local elections in May, and is encouraging all trade unionists that want to fight back to consider standing too.