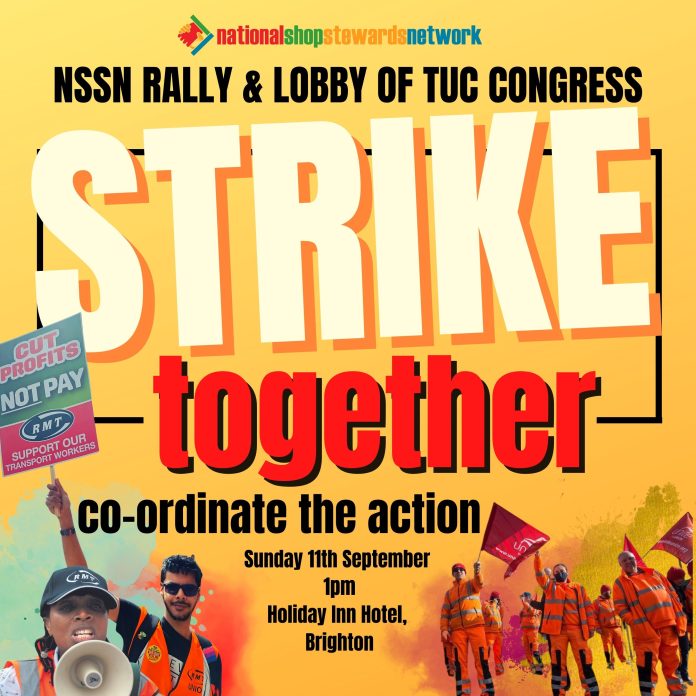 The National Shop Stewards Network stands in solidarity with the rising wave of strikes as workers fight back against the employers and Boris Johnson’s Tory government amid the relentless cost of living crisis.

We will again be organising a rally before the start of TUC congress, which this year is being held in Brighton. It will be calling for the unions to coordinate action across the private and public sectors to demand the pay rises that workers need as prices spiral. Eleven years ago at the 2011 TUC congress, 29 public sector unions met together to agree a joint strategy that led directly to the N30 strike that November: of 2 million workers in what was effectively a public sector general strike, against the Tory attacks on workers’ pensions.

Workers from different unions and workplaces told the Socialist why they’re going, and why it’s important to encourage others.

Please support this model motion and take it to your union branch and trades council and support the NSSN rally and lobby in Brighton:

“This (union branch/trades council) gives our full support to workers being forced to take strike action against their employers backed by the Tory government. The cost of living crisis, fire and rehire tactics and other attacks by employers in pursuit of maintaining profits at our expense all mean workers are uniting to fight back.
We will continue to give our solidarity, building practical and financial support to all striking workers. The increasing number of disputes shows the immense power of workers. If unions act together, significant victories can be won. We also oppose the Tories’ threats to introduce further anti-union legislation to the raft of undemocratic restrictions already in existence and call on the TUC to coordinate opposition.
We call on unions in struggle to urgently come together to discuss and formulate a strategy to coordinate industrial action ballots and strikes.
We therefore agree to build the National Shop Stewards Network (NSSN) rally and lobby of TUC congress in Brighton on Sunday 11 September behind this call.”

If you want to attend the NSSN TUC rally and need transport, email us via [email protected] To make a donation to the NSSN and/or get your union branch/trades council to affiliate for an annual fee of £50, either make a cheque out to ‘National Shop Stewards Network’ and post to NSSN, PO Box 54498, London E10 9DE or pay online: HSBC – sort code 40-06-41, account number 90143790.

The rally and lobby are supported by: