Build a strategy to win on pensions 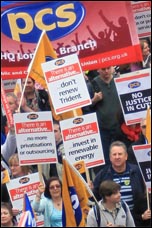 Part of the PCS contingent on the massive 26 March TUC demonstration , photo Senan

Public and Commercial Services union (PCS) members have voted by huge majorities to reject the government's final offer on pensions which is intended to make us pay more, get less and work longer.

Members also voted for national coordinated action with other unions to win a fair settlement.

90% voted to reject the offer and 72% for further action. This is the best vote achieved in PCS and under the most difficult circumstances.

Our members are determined not to allow the government to get away with stealing their pensions.

PCS has been at the forefront of the pensions campaign, arguing that the only way to stop the attack completely or win concessions would be to build the widest possible trade union alliance.

The government intend to roll out pensions 'reform' across the public sector. Coordinated national action was always the best way to challenge it.

PCS showed it was possible to fight back while many other union leaders and the TUC stood back from the type of effective campaigning, including industrial action, that could challenge the attack.

On 30 June last year PCS members, along with members of the education unions, including the biggest teaching union NUT, went on strike, demonstrating that workers are prepared to struggle.

It was the example shown on 30 June, along with the government's intransigence, that directly led to 30 November (N30), the biggest strike in many decades.

Had the unions pressed home the advantage then there is little doubt concessions would have been possible.

But the TUC and other union leaders, particularly in Unison, the biggest public sector union, bowed down to an ultimatum by the government.

This was designed to divide and rule, to call off the industrial action campaign to "consider" a so-called Heads of Agreement that offered no concessions whatsoever on the core issues millions struck against - paying more, getting less and working longer.

PCS played a key role in rebuilding a coalition of unions willing to continue the fight, particularly via the emergency 7 January conference called by Left Unity in PCS.

In order to succeed the PCS national executive (NEC) has agreed that action had to take place in more than one pensions sector, the civil service and education being the most likely.

This is a defining battle and failure to stand up to the attack would give the government the green light to step up their attacks on jobs, pay, privatisation and terms and conditions.

PCS members were clear, the government offer was overwhelmingly rejected and they would be prepared to take action to defend their pensions.

This result was achieved in the context of major unions dropping out of the N30 coalition, continuing attacks from the government and a pay freeze that is hitting our low-paid members very hard.

It was also won on the clear understanding that, as set out in the ballot insert, NUT, UCU and Unite would be part of the alliance that could deliver a "strong campaign". The campaign was due to be re-launched with a one-day strike on 28 March.

Unfortunately at their meeting last week the teachers' union NUT voted not to take national action on 28 March.

NUT conference in a few week's time will debate whether or not to continue in the alliance with nationally coordinated action.

Unite has now decided to ballot its members in the civil service before taking action.

In these circumstances and despite the fact the Northern Ireland Public Services Association (NIPSA) would almost certainly have taken action, the PCS NEC has agreed not to take action on 28 March.

To go ahead in such circumstances would mean in significant parts of the country only PCS members would be taking action effectively on their own.

This is precisely what we told members we would not do, take action on our own or without a coalition of unions capable of pressurising the government into returning to the negotiating table.

Given these developments, the NEC agreed that PCS must continue to work with other unions to build for national coordinated action at the earliest possible opportunity and before the end of April if possible.

It was also agreed to organise mass constituency lobbying of MPs during the Easter recess, including cabinet minister's constituencies.

PCS branches will support and organise local protests and campaign events against the government's cuts programme, including their latest vicious plans for regional and local pay.

Action with a strengthened coalition is entirely possible

We must honestly recognise that the NUT decision not to take national action on 28 March is a setback.

But if its conference in a few weeks decides to build for national coordinated action then action before the end of April with a strengthened coalition is entirely possible and certainly what PCS will work for.

While regrouping the union alliance cannot be solely contingent on a decision at the NUT conference, a positive decision would be an extremely significant boost to putting together a credible alliance to win concessions.

NUT and UCU are to take action in London only on 28 March and PCS will offer whatever support and solidarity it can.

But we will not join that action because it is simply not the type of industrial action response we consulted our members on - large-scale and effective national coordinated action across at least two sectors.

PCS reps have worked hard to win the ballot and build for 28 March and there will clearly be disappointment.

However we must always treat our members with respect: they have repeatedly shown they are prepared to follow the NEC's call for action, but to ask them to take action on 28 March when the coalition we worked so hard to put together to win concessions is clearly not properly in place would be an abrogation of responsibility to low-paid members whose loyalty and determination has been a beacon to the movement.

The NEC is absolutely confident that the best way to proceed is to recognise we must now re-group. In the coming weeks we must put together the type of coalition we told members in the ballot was required if we are to win on pensions.

PCS will continue to work for the widest possible trade union alliance that recognises the fight against the pensions robbery as part of a broader fight against the government's austerity agenda. PCS will now do all it can to build for effective action in April.

This version of this article was first posted on the Socialist Party website on 20 March 2012 and may vary slightly from the version subsequently printed in The Socialist.