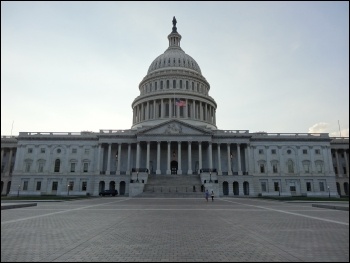 US Capitol Building during the government shutdown, photo emw/CC   (Click to enlarge)

Elan Axelbank, Socialist Alternative (Socialist Party's co-thinkers in the US)

This government shutdown is now the longest in US history. On 22 December, Trump shut down the government, demanding $5.7 billion for his infamous 'border wall'.

He claims it is the only solution to the "national security crisis". With astronomic healthcare costs, low wages, $1.5 trillion student debt, and exorbitant housing costs in the big cities, building a wall is hardly the biggest 'security' concern.

On 15 January, workers got their first $0 pay check. For those making $500 a week - the average salary of a federal worker according to the American Federation of Government Employees (AFGE) union - missing a pay check is the difference between making rent or not making rent, full meals or partial meals, medication or no medication.

Mass sympathy for unpaid federal workers, and majority opposition to the wall, has weakend Trump's position.

Trump is now threatening an indefinite shutdown. Although not federal workers, 35,000 Los Angeles teachers started striking on 15 January for better school funding and staffing, showing how to fight back.

Airport security agents have been calling-in sick (call-outs). 150 agents did so from JFK airport in New York and 75 from Dallas-Fort Worth (three times the normal number) on 11 January.

Air-traffic controllers, whose 30-year low staffing level is even further exacerbated by the shutdown, are doing the same.

AFGE union officials have explained the call-outs are not part of an organised action, but are due to workers legitimately needing to call-out in order to find other work that actually pays.

There have been rallies of federal workers across the country and airport security call-outs persist, but they have not yet coalesced into the organised and coordinated mass movement needed to force Trump to end the shutdown immediately.

Socialist Alternative has attended these rallies and we gave out leaflets at airport employee parking garages calling for coordinated workplace action and mass protests to end the shutdown. We are also demanding no border wall, immigrant rights, and immediate back pay for all federal workers.

Meetings of workers in all affected workplaces should be organised right away to discuss how to fight back, and begin to organise action to defend their rights, including being paid for work.

Well-prepared mass protests by thousands of federal employees should be immediately organised in front of every federal building and airport, including mass civil disobedience.

Other unions could mobilise too. Unfortunately, the union leaders have not shown this sort of fighting strategy, although rank-and-file initiatives and action from below could push them to take bolder action.

Escalating mass protests would earn the support of the overwhelming majority of people against the government shutdown. This would crack the Republican 'wall of shame' in the Senate and be a massive blow to Trump.

If federal workers do take action, it's extremely important that all working people support them.

The $5.7 billion Trump wants for the wall - plus even more if we tax the rich and big corporations - could instead be spent on pay rises for federal workers, jobs, crumbling infrastructure, healthcare and education.

A continuation of the government shutdown is clearly not an option for federal workers. The Democratic Party leadership's tactic so far has been to meet with Trump behind closed doors and then tell the media, not incorrectly, how "unreasonable" he is being.

But this is no strategy to end the shutdown. Since when have Trump and the Republicans responded to reason?

Workers have the power to defeat Trump and his shutdown with coordinated workplace action and mass protests.

We need bold action from below to demand the union leaders mobilise the full power of the trade union movement, the anti-Trump movement and all working people.