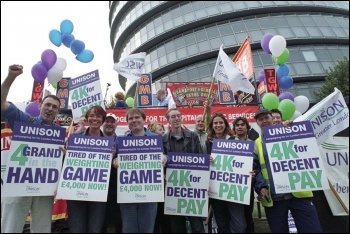 Employers and the government get away with it because the legal minimum 'national living wage' is £7.83 an hour across the country. It is set to rise to £8.21 from April.

The Socialist Party argues that not only is the legal minimum not enough - neither is the so-called Living Wage. We call for a minimum wage of £10 an hour as a step towards a real living wage. Council workers in London are starting to demand more to avoid £10.55 becoming the new maximum.

If the state can afford to give already generously paid MPs a 2.7% pay rise to £79,468 a year then it can afford to pay public sector workers a wage that means there's not too much month left at the end of their money.

They should then link up with private sector trade unions - whose members in the BFAWU bakers' union, Unite the Union and others walked-out for better pay in McDonald's, TGI Friday's and JD Wetherspoon last year - to win a minimum wage of £10 an hour for all, with no youth exemptions.