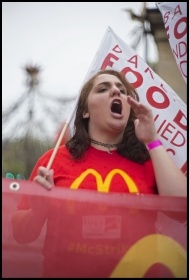 There is so much empty noise around Brexit - so much so that Banksy's artwork depicting MPs as chattering monkeys has been put back on public display.

Outside parliament protesters holler through megaphones as the scaffolding upon which political interviews are conducted gets higher and higher.

There's a cacophony of noise. And yet there's a silence.

There's the silence of what should be being said: That now nearly three million children are living in poverty.

That 'survival sex' - essentially sex work - is being turned to by thousands of women as they lose their benefits due to Universal Credit and the imposition of cruel sanctions.

That some schools now don't teach the full week - opening for just four days - because of school budget cuts.

That working-class women are dying 100 days earlier because of austerity - living for eight fewer years than richer women, with the gap widening.

With a few exceptions, there's a screaming silence from the trade union leaders too. They have failed to articulate the desperate situation in working-class communities.

And they have failed to mobilise their members in struggle to get rid of this rotten Tory government, or to fight for a Brexit in the interests of workers - for the socialist alternative to the EU.

Then there's the faint, hardy audible, voice of Jeremy Corbyn. On top of that, there is no doubt that there has been a conscious policy by the capitalist media attempting to turn the volume down on Corbyn and Corbynism, especially as the Brexit crisis has intensified.

We're subjected to endless interviews of Blairite MPs like Jess Phillips praising Tories like Oliver Letwin, or Tom Watson funnelling all calls for a general election down the blind alley of a second referendum.

We say break the silence. We have to fight for a general election now - in the trade unions, the workplaces, the colleges and working-class communities.

A general election is not inevitable in the short term. Pro-capitalist politicians are divided on many things. But they are united in wanting to keep Corbyn out.

Really, they are afraid of all those who stand behind him - of the millions of working-class people who could be mobilised into action if they see the opportunity to fight for genuine, socialist change.

The real aim of all pro-big-business politicians - Leave or Remain, Tory or Labour - is to keep the door firmly shut on that. Nonetheless, the depth of this crisis means we could end up stumbling into a general election regardless of these politicians' intentions.

If one is called, it should be treated as the starting gun - signalling the ending of this establishment-imposed silence and the beginning of the real fightback.

This needs to be a fight that demands an end to the humiliation of poverty, insecurity and the lack of good jobs - things that could start to be achieved by the election of a Corbyn-led government with socialist policies, and the unleashing of a proper fightback among working-class people.