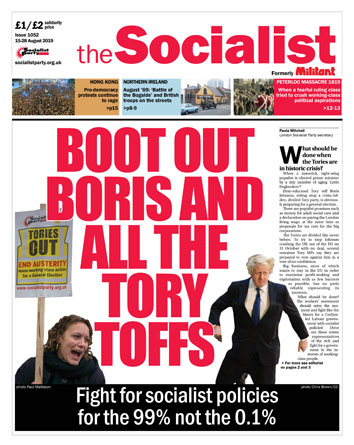 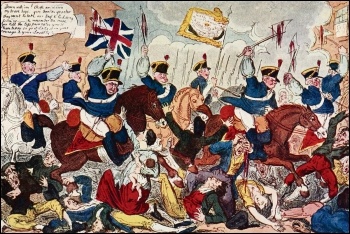 Friday 16 August will mark the bicentenary of the Peterloo Massacre, perhaps the most significant atrocity carried out by the British authorities against their own people.

Thousands of words will be published which will talk about the lack of democratic rights as the motivating factor for the 60,000 or more people who assembled on St Peter's Field, Manchester on that fateful day in 1819.

While the struggle for genuine representation was indeed the theme of the meeting, for most of the participants, who were mainly textile workers, life or death issues were prominent in their motivations. Few had any awareness that their lives would be imperilled for wanting a better world.

British society, contrary to what many capitalist commentators would assert, has never developed in a peaceful and gradual way. There are many instances of volatile upheavals in its history, the period following the end of the French wars being one of them.

British capitalism had been at war with France almost continuously from 1793 until the Battle of Waterloo in June 1815. With the war over, hundreds of thousands of men returned from the fighting to find a scarcity of jobs. Manufacturing industry faced a downturn with reduced needs for armaments, uniforms and other materials.

The Tory government refused to assist the poor; in the wars it had accumulated debt of £1 billion (approximately worth £88 billion today - roughly the figure reduced from government spending by the Con-Dem government of 2010-15). This was a government representing wealthy landowners, financiers and a section of the big manufacturers incorporated into the ruling class.

To make matters even worse, the government introduced the Corn Laws, which kept the price of grain artificially high. This, of course, pleased the Tories' landed friends but raised the cost of bread, the most staple of foodstuffs. This added to the hardships already faced by workers and the poor.

Protests erupted after the war. Two demonstrations in Spa Fields, London, at the end of 1816 were put down by the government. In March 1817, weavers in the Manchester district organised a march to London to present a petition to the Prince Regent on their distress.

Most of the 'Blanketeers', as they were nicknamed, were arrested or prevented from marching past Stockport. In June the same year, workers in Pentrich Derbyshire, although incited by a provocateur, rose against the government (see 'The Pentrich Uprising - revolution and counter-revolution in 19th century Britain').

The following year saw an upturn in the economy, which emboldened workers to struggle for pay rises. Workers then had not recovered their living standards of many years previous but attempted in 1818 to recoup some of their losses. This was at a time when trade unions were banned by the Combination Acts of 1799 and 1800.

Nevertheless, organisations sprung up and mushroomed as the anger built. Weavers and spinners in Manchester, Stockport and the Lancashire districts were part of a strike wave.

Some groups of workers won increases but most returned to work with very little to show for their sacrifice as employers linked with the government to suppress the actions.

Thwarted on the industrial plane, workers often turn to the political field against their enemies. This they did in early 1819 with mass meetings in Manchester and Stockport, addressed by radical leader Henry Hunt.

At Stockport, the assembled crowd beat back the attempts of the authorities to break up the meeting. Further meetings were held in the north west and throughout Britain to discuss the plight of working people. At some, so extreme was their situation, that government-sponsored mass emigration to the Americas or Australia was considered.

By this time, petitioning the Prince Regent - the aim of the Blanketeers - was seen as pointless. But at most of these meetings, each of which was attended by thousands, the demand for political reform was raised and endorsed.

In 1819, only about 5% of the adult population, all male, owned or rented enough land to vote.

Most parliamentary seats were in the gift of the aristocracy and their allies. Many seats were 'rotten boroughs': Old Sarum, an empty hilltop in Wiltshire, and Dunwich in Suffolk, which was falling into the sea, both elected two MPs. Manchester, even then a sizeable town, had no designated MP of its own.

So, parliamentary reform became a symbol for the struggle for a better life. If workers could elect better MPs, they thought, their lot might improve. But whereas the mass of workers needed food, shelter and jobs, for many of the middle-class radicals, property owners themselves, their standpoint was that they had been deprived of the spoils accruing to the richest sections of society.

The English Revolution of the mid-17th century, led by Oliver Cromwell, was admired by many but the so-called 'Glorious Revolution' of 1688 had led to a government based on a coalition between a restored monarchy and the ruling class. It formed the Bank of England and regulated the Stock Exchange, forced the union of England and Scotland, and accelerated the pace of enclosures, which robbed many peasants of their land, forcing them to become agricultural labourers or even move to the towns. This was the foundation of capitalist society in Britain, and its ruling forces in 1819.

For the middle class, they wanted a bigger share of an expanding cake. But even a sniff of reform was anathema to the Tories. Echoes of the most radical phase of the French Revolution (1789-94) and the threat of 'Jacobinism', the most radical government of that phase, still reverberated through British society. Even if they could, the ruling class would be loath to offer a crumb to those protesting if it meant opening the floodgates to further change.

So when the Manchester radicals called a meeting for 9 August 1819, to elect a peoples' representative, the magistrates of the town banned the demonstration on the grounds that an election was illegal.

Lord Sidmouth, the Tory Home Secretary, wrote to the magistrates urging them to suppress the movement, not excluding the use of force. The government also used spies to report on the political movements, and intercepted post between radicals. The government was fully aware of the potential danger to its rule of a mass movement demanding reform.

The radicals rearranged the meeting for 16 August, with a less provocative title to which the authorities found it difficult to object. Nevertheless, a military intervention was prepared. The Manchester and Salford, and Cheshire Yeomanries, part-time forces, were mobilised to be used alongside regular Hussars and special constables.

Tens of thousands, the largest proportion being handloom weavers, outworkers in their own homes, came to St Peter's Field from Manchester and the surrounding towns. Some had been 'drilling' outside of their towns, but this was not to protect the participants but to learn to march in a disciplined way!

Hardly any were prepared for a possible attack by the armed forces. Many women attended, and women's political unions had been formed in some towns, mainly to back up the demand for universal male suffrage, although some called for votes for women almost 100 years before this was won. Children had been brought along; a semi-festive spirit prevailed.

Hunt was the main speaker at St Peter's Field beginning at 1.15pm. Barely had he said two sentences when the special constables began to clear a path. The Riot Act had allegedly been read, though nobody heard it, and a warrant issued for the arrest of Hunt and other radical leaders.

The Yeomanry charged in, emboldened by alcohol, and proceeded to attack the crowd. They were followed by the Hussars. In less than 30 minutes, the vast majority of the 18 dead and almost 700 injured were mown down on the field. There had been no provocation other than support for political ideas hostile to Toryism.

The people were defenceless. The authorities had made a brutal political point. They feared a revolution so they made the people fear them. That evening, the Ancoats district rose up and the last fatality, `Joseph Whitworth, was shot dead.

The authorities in London and Manchester congratulated each other, and pursued the radicals. The government brought in the 'Six Acts' which limited still further the already restricted ability to organise politically and attacked the few existing liberties of the press.

Radicals responded to the massacre with open meetings of tens of thousands in London and other cities in protest at Peterloo. There were uprisings in some towns in the north, which were put down.

In early 1820, radicals led by Arthur Thistlewood planned to assassinate the cabinet. The 'Cato Street Conspiracy' was thwarted by a police spy.

In the first week of April the same year, central Scotland saw the 'Radical War', a series of strikes and protests against the authorities. However, the ruling class had bought some time in preserving its rule.

What lessons should socialists today glean from the events of Peterloo? Firstly, that no ruling class will give up its power without a struggle.

The authorities were massively armed and the working class was unprepared for its brutality. Any workers activity - demonstrations, picket lines, meetings - has to consider the level of risk posed and the appropriate response.

Secondly, that the working class has to have its own organisations, programme and leaders. After Peterloo, many middle-class radicals fled for cover. They feared the government's power but also the potential strength of the working class.

Eventually, government political concessions through the 1832 Reform Act and the fear of revolution broke sections of the middle class away from the working class.

This was largely due to workers beginning to organise, through larger and more stable trade unions, even despite severe limitations on their activity.

The formation of workers' political groups, culminating with the Chartists in 1838, who linked democratic political demands to a social and economic programme for workers, further challenging capitalism in Britain.

Today, when capitalist governments, both in Britain and internationally, are curtailing democratic rights and extending their rule by semi-authoritarian methods, extending democracy might appear popular.

But such reforms in and of themselves are not enough; a socialist programme for change, including taking the economy into working-class hands, has to be inscribed on our banners in the 21st century if we are to end the conditions which forced the workers of Peterloo to protest.