One of the last taboo issues for women, the menopause, is now getting the attention it deserves.

In 2014, I, along with other trade union caseworkers in the National Education Union, had identified that older women were being targeted by managers for capability issues. Nicky Downes and myself, both Socialist Party members, wrote a motion for our conference leading to policy and advice documents which were taken up by other trade unions and the Trade Union Congress on the menopause.

At the Labour Party conference recently, I was pleased to see Dawn Butler, Labour's shadow equalities minister, announced that companies with more than 250 employees are to be required to train managers on the effects of the menopause so they can accommodate the needs of employees.

As well as this, they would need to look at their sickness absence policies to ensure women were not discriminated against. Thousands of women suffering from the impact of the menopause could therefore be protected from discrimination.

However, the limit on 250 employees would mean that many women would not be protected and that cannot be fair.

All women need protection and better working conditions with proper ventilation and access to regular breaks. We need much more research into the menopause and how it impacts on women.

Access to earlier retirement, shorter working weeks and flexible working, without a loss in income, would also help all workers, but especially women.

The taboo is broken, now we have to fight for our rights. 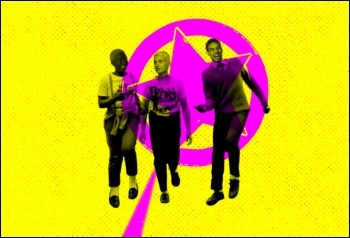 Rebel Music is a coming of age story set in Birmingham during the late 1970s. Through teenagers Denise and Trudi, the play follows the emergence of punk and two tone against a backdrop of rising unemployment and far-right violence.

While Denise, whose dad is from Jamaica, becomes an activist in the Rock Against Racism movement, the brother of second generation Irish Trudi is drawn towards the fascist National Front after being made redundant from the BL car plant at Longbridge.

Though not a detailed political history, Robin French's script captures the mood and the music of the time with relatable and sharp-witted working-class characters skilfully brought to life by the cast of three, with classic punk and reggae songs re-worded to tell the story. An entertaining and energising evening, whether you're old enough to remember the events shown or not.

When recently deceased Jacques Chirac stood against Jean-Marie Le Pen in the presidential election of 2002, the slogan which sticks in my mind was 'vote for the crook not the Nazi'. The BBC showed voters who ritually disinfected themselves after voting for Chirac. Hardly a ringing endorsement.

The slogan was in fact prescient because in 2011 he became the first former president to be convicted of corruption following embezzlement charges in a party funding scandal when he was mayor of Paris. The courts were exceptionally lenient, letting him off with a token suspended sentence. This contrasts with the detention of the 'sans papiers' (undocumented immigrants) who faced time in jail when they had not committed a crime.

France is no stranger to corrupt politicians but Chirac managed to stand out as a hideous example.

Where will votes go?

The establishment and their pseudoexperts pontificate about whether the Leave vote will go to the Tory party or Brexit Party.

Are these people ignorant, or is it pure propaganda? I'd remind that a percentage of both Leave and Remain voters also voted for Corbyn in 2017.

They also completely ignore the youth vote. A substantial amount of that vote will go to Corbyn if he pursues the left wing programme of 2017: scrapping zero-hour contracts, tuition fees, a £10 an hour minimum wage, and building 500,000 affordable public homes. With regards to the narrative 'are you Leave or Remain', the answer should be unequivocal - we are an anti-austerity party.

Don't let Johnson fight the election on the Brexit debacle. Fight it on socialist policies. They try to bury their rotten policies behind the Brexit debate. The beneficiaries of some Tory Remain voters will be the Lib Dems. Equally some Leavers will vote for the Brexit Party.

Either way the Tories could lose seats. The situation is very fluid with votes cast all over the place. All the more reason for Corbyn to stand by his left-wing message.