1. Which organisation voted to strike for the first time in its 103-year history?

3. Who did actor Christian Bale play in the film Vice?

4. How many working days into the New Year did top UK company executives 'earn' the same as the average worker's annual salary?

5. How much is the average top CEO paid for every £1 earned by their workers?

6. Who was no April fools joke?

7. Whose murders 100 years ago were commemorated on 15 January?

8. Who was toppled after a 30-year dictatorship?

9. Where did 200 million workers walk out on strike?

10. Name the reported fan of Bismarck, who became Special Adviser to Boris Johnson?

12. Where were 51 Muslim worshippers murdered by a far-right terrorist on 15 March?

13. Where were Christian worshippers murdered on Easter Sunday this year?

14. Whose blacklisting dispute ended in victory in March?

15. Whose 80 days of strikes secured a victory in May?

17. Name the MP who was suspended and later resigned from Labour over false allegations of antisemitism?

18. What was "irredeemably flawed" after five years?

19. Which group of UK car workers marched against the closure of their workplace?

20. How much have the world's top five oil and gas companies spent opposing the Paris Agreement on climate change since 2015?

22. Why have millions of young people been striking every month around the world?

23. How much in shareholder dividends are UK businesses expected to pay out this year?

25. Name the National Union of Journalists member murdered in Northern Ireland in April?

26. Name the socialist elected to Fermanagh and Omagh council in May?

27. Who was cleared of charges over the Hillsborough stadium disaster despite a second coroners finding of "unlawful killing"?

28. Who said they would "rather die in a ditch" if Brexit didn't happen on 31 October?

32. Which company was fined £126 million after "being run with scant regard for its responsibilities to society and the environment."

33. Who struck a blow against Turkey's 'strong man' president Recep Erdogan in June?

34. In July, what workplace occupation succeeded in saving the workers' jobs?

35. Who was ousted by a mass movement after tweeting homophobic, racist and insulting text messages?

36. Where did mass protests and strikes oust the country's prime minister?

37. Where did a metro fares hike lead to a countrywide social uprising?

38. Whose 'special status' was ended in August?

39. What 200-year anniversary of a mass working-class protest in England was commemorated in August?

40. Who was sentenced to imprisonment for organising a referendum?

42. In commenting on collapsed tour operator Thomas Cook in Parliament, who callously recycled a two-year-old statement?

43. In which government department did outsourced union members win pay rises and improvements to working terms after months on strike? 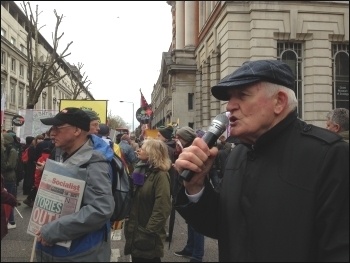 44. Name the worker-militant and former socialist councillor in Liverpool who sadly passed away in October?

45. Where did a 12-day uprising force the government to reinstate a fuel subsidy?

46. Which fast food workers struck for £15 an hour in November?

47. Whose anger over pensions, pay and working conditions led to an eight-day strike?

48. Who pledged to abolish the House of Lords?

49. Where was Johnson given short shrift over his handling of the floods in November?

50. What member of the establishment failed to apologise to victims of sexual abuse by US businessman Jeffrey Epstein?

1. The Royal College of Nursing in Northern Ireland, over pay.

6. Comedian Volodymyr Zelensky, elected as president of Ukraine on 21 April.

8. Sudan's president Omar al-Bashir on 11 April in a coup following an eight month-long uprising by the country's civilian population.

9. India, on 8-9 January, over low pay, unemployment, poverty and the sectarianism of the ruling Modi government.

11. Gaffe-prone bigot Prince Philip. Having careered into a lowly Kia and injuring the occupants, the Crown Prosecution Service announced that prosecuting him wouldn't be in the public interest.

13. Sri Lanka. The government and police had ignored warnings of a terrorist attack.

18. The privatised probation service, according to HM Chief Inspector of Probation.

22. The failure of capitalist governments to agree meaningful environmental policies.

30. The Extradition Bill would have allowed political opponents of Beijing to be extradited to China.

33. Voters in Istanbul's mayoral election. The first time in Erdogan's 17-year rule that his right-wing AKP party has been defeated in an election.

34. Harland and Wolff shipyard in Belfast.

37. Santiago, Chile, against the neoliberal government of Sebástian Pinera.

38. Indian-occupied Jammu and Kashmir, whose 'autonomy' was forcibly ended by Modi's BJP government.

39. The Peterloo Massacre. A peaceful gathering of workers and their families in fields outside Manchester was brutally attacked by government troops.

41. Communication Workers' Union (CWU) members in Royal Mail. This was blocked by an unelected judge, whose action satisfied the bosses and government.

42. Tory transport minister Grant Shapps. His speech was reused from 'failing' Chris Grayling's, delivered after the collapse of Monarch Airlines in 2017.

45. Ecuador, after mass strikes and protests by a united struggle of workers and indigenous organisations.

49. South Yorkshire, where he was repeatedly heckled on a visit.

50. Prince Andrew, in a car-crash of an interview on the BBC.