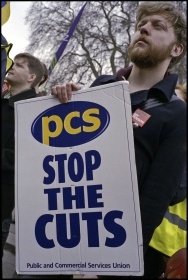 The government has announced new support for benefits claimants who contract, or have to stay at home due to, Covid-19.

Faced with the deepening coronavirus crisis, all non-essential Jobcentre appointments are now suspended until further notice, and all health assessments.

Claimants will not have to produce a 'fit note' from a GP, since most are asking patients not to attend their practice.

For existing claimants this will mean continuing to receive their current rate of benefit. For new claimants, a Universal Credit advance is payable for one month, and ESA from day one.

PIP is unlikely to be awarded except in cases of terminal illness. This is unacceptable. We demand it be paid to all who need it on the basis of self-reporting.

The rest of the measures are positive, as they reduce the risk to the vulnerable. But they are also insufficient for the extent of the crisis.

Private sector employers are already shuttering businesses. This could mean tens of thousands of new benefit claims. The Department for Work and Pensions (DWP) will have trouble handling that given its cuts of 40,000 jobs over the last ten years.

Moreover, claimants cannot afford to live on a Universal Credit payment worth between £251 and £319 a month. And the measures don't consider what happens when the crisis stretches beyond that first month.

Thousands and thousands of self-employed workers don't qualify for the paltry statutory sick payment of £94.25 a week. They will have to rely on Universal Credit or ESA.

Socialist Party members on the executive committee of civil servants' union PCS, which represents staff in DWP, successfully moved a resolution on the issue.

It instructs the union to approach management about protection for claimants who contract the disease or have to self-isolate, and those looking after dependents.

The motion demands statutory sick pay to be massively increased to the value of a living wage of £12 an hour, or £15 in London - payable immediately to all those working precariously, with money to be recouped from employers.

It also demands emergency recruitment into the civil service, and suspension of all redundancies, to administer the welfare system. The anger of DWP workers is palpable on the shop floor. A lead from the unions to pressure the government is vital, to protect the unity of workers, both employed and unemployed.