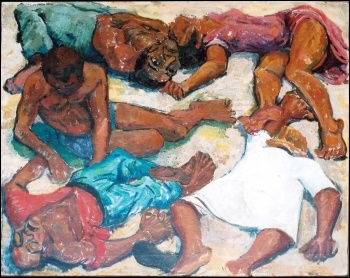 On 21 March 1960, a peaceful protest took place in the black township of Sharpeville, South Africa, against hated 'pass laws'.

In response, police shot dead 69 protesters and wounded 180 others. 60 years later the Sharpeville Massacre is remembered across the world.

The Sharpeville Massacre took place in a South Africa that denied even basic democratic rights and freedoms to those considered as "non-white" under an apartheid (racial segregation and discrimination) system.

White people, who made up just 15% of South Africa's population, stood at the top of society with their power and wealth, and owned 92% of the land.

An exclusively white electorate was represented by the National Party (NP) - which was reelected in 1948 and stayed in power until 1994.

Black South Africans (80% of the population) were relegated to the very bottom. Apartheid laws restricted almost every aspect of their lives.

The hated pass laws meant that the black population had to have their identity pass at all times. This gave the government strict control over the movement of black South Africans, restricting where they could work and live.

Many peaceful protests took place against the apartheid laws, including the pass laws. In March 1960, the Pan African Congress (PAC, a black-nationalist rival organisation that had split from the non-racial African National Congress - ANC) organised a peaceful protest in the black township of Sharpeville.

The aim was to march to the police station without their passes and ask to be arrested. As they chanted freedom songs and shouted "down with the passes" the police opened fire on the unarmed protesters without warning.

It was estimated that 700 bullets were fired with most protesters shot in the back. This slaughter was not accidental.

Extra police had already been brought in, along with armoured vehicles and military jets flying overhead.

The use of brutal force demonstrated the potential military power of the apartheid capitalist regime.

But at the same time it revealed the regime's fear of a revolutionary uprising of the black South African working class.

A state of emergency was declared with around 2,000 people detained. On 8 April, both the ANC and PAC were banned and it became illegal to be a member of these organisations.

ANC leader Nelson Mandela, and others, concluded that an armed struggle (both the PAC and ANC formed military wings) was necessary to defeat apartheid.

Forerunners of the Committee for a Workers' International (CWI - the socialist international organisation to which the Socialist Party is affiliated) warned that an underground military struggle, although heroic, would not bring down a brutal capitalist apartheid government armed to the teeth.

In fact, it was the mass revolutionary uprising of black youth in the 1980s (preceded by the bloody Soweto school student uprising in 1976), and widespread industrial strike struggles - with the demand for socialism on their banners - that ultimately caused the fall of apartheid in the early 1990s, and the release of Nelson Mandela after 27 years in prison.

In reality, the white-dominated apartheid state was forced to carry out 'reforms from above' to prevent 'revolution from below'.

But the lack of an organised mass revolutionary socialist party based in the working class, allowed capitalism to continue, despite the fall of apartheid and the ANC taking power.

Instead, a Tripartite Alliance was formed in 1990 by the leaders of the ANC, South African Communist Party and the Confederation of South African Trade Unions (Cosatu).

The Alliance effectively held back the revolution and allowed capitalism to survive, post-apartheid.

The ANC had adopted the Freedom Charter in the 1950s, under pressure from the working class for a revolutionary change in society. The charter included nationalisation of the commanding heights of the economy.

In the 1980s, the two million-strong Cosatu adopted the Freedom Charter under the banner of "Socialism means Freedom" and led a series of general strikes, which were a key factor in the collapse of apartheid.

However, when in power the ANC leaders, lacking a socialist alternative, became enthusiastically pro-capitalist.

This was revealed through an aggressive programme of mass privatisations of public services such as electricity and water.

In the ANC's first five years of power 500,000 jobs disappeared in construction, engineering, textiles, mining and the public sector.

The radical features of the Freedom Charter, like nationalisation, were forgotten. Inevitably this led to a drastic fall in membership and rank-and-file activity, and an influx of careerists.

Many former ANC militants simply enriched themselves, like Cyril Ramaphosa, the current president of South Africa.

This former miners' union leader became a multimillionaire, multiple property owner, serving on the board of Lonmin, owners of the Marikana mine site (see below).

Under apartheid the police and armed forces were used to intimidate and gun down workers and youth taking protest action, as seen in Sharpeville and Soweto.

Unfortunately for the black working class, the same methods were adopted by the ANC government, with its black capitalist elite in control.

In 2012, between 10 August and 20 September, 47 striking platinum miners were gunned down in Marikana, with another 78 injured. Like Sharpeville, most were shot in the back as they were running away.

Those black workers slaughtered at Sharpeville, Marikana, and many others in between, will always be remembered.

The same brutal methods used under apartheid and the ANC regime to slaughter, if necessary, workers fighting for a decent future demonstrate in action the complete capitulation of the ANC leadership to capitalism.

Capitalist 'experts' across the globe differ on how to solve the current world economic crisis but are in total agreement that capitalism is the god of profit and must remain at any cost.

Capitalism exists to make the privileged few even wealthier at the expense of the blood, sweat and tears of working-class people.

The task of abolishing capitalism and building a democratic socialist future can only be carried out by the mass of the working class, organised for struggle and armed with a socialist programme.

This is what the Marxist Workers Party - CWI in South Africa - is committed to building. Only this could guarantee no more Sharpevilles or Marikanas.