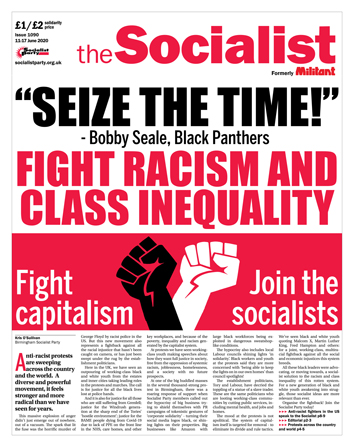 Emery Addams from the Independent Socialist Group (US) - co-thinkers of the Socialist Party in England and Wales - spoke to us about the significance of the mass anti-racist protests shaking the US, outlining the programme and organisation necessary to end racism. 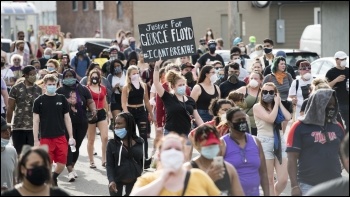 Black Lives Matter protest in Minnesota following the killing of George Floyd in May 2020, photo Fibonacci Blue/CC   (Click to enlarge)

This is the biggest anti-racism mobilisation since the Civil Rights movement in the 1960s. The capitalist media has focused on riots and violence, despite the bulk of the action being peaceful protest. How has this uprising developed so far?

At this stage, violence almost exclusively stems from the police. Despite these attacks, the movement has won incredible victories from the capitalist class in a couple of weeks that were almost unimaginable a month ago. Not only have all of the officers responsible for George Floyd's murder been charged and fired, but the momentum is being pointed at the police as an institution.

This can be seen through the push for schools to cut ties with the police, the $100-150 million that has been cut from the Los Angeles Police Department budget, and the calls from the majority of Minneapolis city council to 'dismantle' their entire police force.

A multiracial movement is emerging that treats racism and police brutality as issues against which all people must fight. US workers and youth are finally seeing what they can win when they act. The task for the movement now is to organise for even larger victories.

Are protesters only angry about racism?

Absolutely not! This movement was born out of the material conditions of the working class - the pandemic response that favours capitalist profit over workers' lives, the recession, and the ever-present realities of police brutality.

Protesters are angry about how capitalism controls and so easily ends their lives. They're protesting for more than the removal of individual racist and murderous cops. Protesters are fighting for a change in the system as we know it.

As socialists, we know that this change can only be achieved by replacing the brutal capitalist system with a democratic and equitable socialist one.

There have been further police attacks since the murder of George Floyd. An unarmed Latino man was killed in California, and many protesters have been beaten, tear-gassed, shot at and rammed with vehicles. How has this affected the mood?

As of 7 June, at least 12 people have been killed due to police violence at the protests, with countless others facing mild to severe injuries and arrest. This hasn't slowed the movement. If anything, it has highlighted to protesters the exact reason they are fighting.

This has also further mobilised nurses, already radicalising due to the pandemic. As police violence grows, nurses are leaving their long shifts fighting Covid-19 to immediately provide medical assistance to injured protesters.

The realities of the triple crises of Covid-19, the ongoing recession, and police brutality have created an environment of solidarity amongst the working class - only strengthening the movement.

Meanwhile, in some cities, police have taken a hands-off approach, or even joined protests. What does this represent?

These are essentially public relations stunts employed by some of the smarter police departments. It allows them to both attempt to pacify protesters, and to push the narrative of 'good cops' vs 'violent protesters.' In numerous cases, the exact same police who kneeled or marched with protesters attacked them just hours later. For the most part though, protesters aren't willing to blindly accept this. Regardless of the performative actions of the police, protesters have continued to push for genuine, systemic change.

A white bar owner shot and killed a black protester in Nebraska. Some might see this movement as a conflict of white versus black.

It's important to note that the protests are widespread and very multiracial. We should also recognise the real source of racism as we know it - capitalism. Racism deliberately perpetuated in the media, education, pop culture, etc., shapes people's attitudes, then reinforces attitudes and unequal conditions through laws. This makes violence against people of colour easy in order to exploit and control the working class as a whole.

These same divisions are created between different genders, sexual orientations, ethnicities and nationalities, and allow the capitalists to pit workers against each other to the benefit of the ruling class. When we fight each other, we can't unite and fight back against our common exploitation by the capitalists. The only way we can overcome racism for good is to fight for socialism - with an organised movement of the entire working class.

There are calls from some quarters to make certain police tactics illegal and cut police funding. Would this stop police violence?

Stopping police from using incredibly dangerous tactics and weapons is a reform we support. Cutting police funding, which is wildly expensive and out of control in the US, would also help many communities transfer needed funds to schools, housing, healthcare, and so on, which would do far more to resolve crime and inequality than policing.

But no reform under capitalism is guaranteed to last. As soon as we look away, the capitalists will roll back the victories we won. The police, as an institution, functions to protect the capitalists, and (often violently) repress the working class. No amount of policy reform within the capitalist system will change this. To truly stop police violence, we need democratic community control of public safety by the working class.

Some organisations are also demanding boycotts of businesses owned by known racists, favouring businesses with black or non-racist owners. Would this resolve inequality?

While certain individuals would be supported in the short term by buying from black-owned businesses, this would do nothing to solve the problems of workers who don't own businesses, which is the majority of society. Instead, imagine what a week of a full economic shutdown from a general strike could win us! Organised action by workers that impacts the capitalists' profits can win systemic change for workers of all races. Individual shopping choices don't hold the same power.

The Black Lives Matter movement fizzled out after its 2014-16 peak. How can young people and workers organise to build the anti-racist movement this time?

We're seeing intense energy in the streets right now, but that can fizzle out quickly if the movement isn't organised around concrete demands. These demands must draw together workers of all races and ethnicities.

The movement also needs to be organised with democratic structures for discussion, debate, and coordination. We can organise neighborhood committees - elected groups who would decide tactics and future action - create a programme to direct the movement, and elect delegates to city-wide, state-wide, and nation-wide committees for larger-scale discussion and coordination. Similarly, a key part of escalating this struggle and maintaining momentum is for the working class as a whole, including unions, to get involved. We need to organise our workplaces through new union drives, and use our unions to defend members against racist incidents and negotiate better conditions for all workers.

We also need workplace action, including slowdowns, sickouts, walkouts, and strikes in solidarity with the anti-racist movement, requiring specific demands to be met before we return to work. This economic pressure would force the capitalists and their politicians to concede to demands such as convicting cops, defunding and demilitarising the police, and more.

Socialists fight against racism in every form, wherever it crops up. But decades of struggle have not ended it. What is needed to finish the job?

Many movements have been coopted and demobilised. Capitalist politicians, especially Democrats, will promise reforms, push the momentum of the movement into the nearest election cycle, and then drop those demands the second they're in office.

We must refuse to accept surface-level concessions, and organise a multiracial movement of the working class outside of the capitalist political parties to fight racism and all other forms of oppression.

This movement should work to build a new workers' party that has democratic structures and a socialist programme. The capitalists are beginning to see the power of the working class. This is no time to slow down - join us, and continue the fight against racism and for socialism.