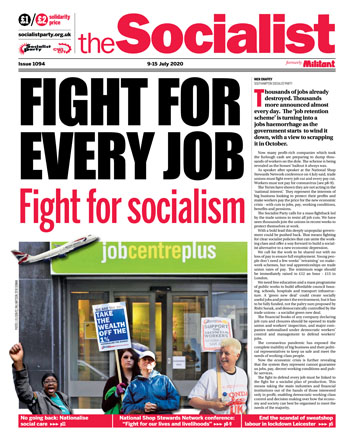 The killing of George Floyd will be fixed into the minds of our generation as we move into a new period. For many, the recent anti-racist protests were a first taste of the strength of working-class people in struggle.

They might have been some people's first protests, but for many they won't be their last. The floodgates have been opened, and young people are beginning to conclude that this system does not work for the majority of them. With racism, division, oppression and poverty, it's a system that lets us down.

The initial protest movement is beginning to ebb in some cities. But none of the issues which brought people to the protests have been solved, neither police racism nor the conditions in which people live. Therefore, anger will inevitably bring people out to protest again in the future.

Before coronavirus, there was a growing crisis facing working-class and young people. We've seen the spread of the gig economy, leaving people in precarious conditions and on poverty pay. There has been a housing crisis, forcing young people to live at home or in overcrowded conditions.

These conditions have also helped the spread of coronavirus, and are partially responsible for the disproportionately high death rates of BAME people.

There have been attempts by the far right to capitalise on the deprivation in society and sow racist division; these have often been countered by local young people who refuse to allow racist protests though their areas.

Even before the recent anti-racist protests, there were international movements against sexism, and a huge outpouring of anger against environmental destruction during the school students' strikes.

Now young people face rising unemployment because of coronavirus and the economic crisis brought on by the pandemic. As well as this, there is a growing crisis in education, with rising tuition fees and a funding emergency in the universities.

So what will be our generation's response? From the huge solidarity, unity and anger shown on the anti-racism protests, clearly it will be one of action.

There can be a number of struggles which take up the multitude of issues facing young people. But the thread connecting these struggles will be the need to fight back against a system run in the interest of profit rather than meeting the needs of working-class and young people.

Austerity and cuts made by this and future governments to make us pay for the coronavirus pandemic have to be resisted.

In our workplaces we will have to organise against poverty pay, casualisation, and layoffs. During coronavirus there has already been an influx of people into the trade unions, and new layers organising for safety at work because it was clear both the government and the bosses wanted to put profit before workers' health.

But we will need to build a bold and fighting trade union movement, fighting to defend every job, for every improvement in pay, terms and conditions, challenging all forms of racism and discrimination and bringing workers together in unity.

Young people are facing the scrap heap of unemployment in their millions. They face being forced to work for their dole, as we've seen in the past with 'workfare' schemes, with bogus apprenticeships and training schemes.

This is just one way the government will try and make working-class and young people pay for the crisis. We will have to fight for the creation of socially useful jobs, on trade union rates of pay.

Austerity has also left young people without decent support networks or safe places to socialise outside of school. Cuts to leisure centres, libraries and youth clubs must be fought, and local councils should refuse to make cuts to services which the vulnerable, and young people, rely on.

We will have to fight for decently funded and free education. It will mean organising in our schools, colleges and universities, and for fighting students' unions that bring students together in struggle. It will also mean fighting for a say in what we learn, as well as a say in how our education system is run.

All of these struggles will expose the strength of working and young people to change society. After all, what has the coronavirus crisis exposed? That working people make the wealth in society. When we can't turn up to work because of lockdown, the economy is in crisis. We have to use that strength to fight for a socialist society, democratically controlled by the working class, and run in our interests. Young people have no choice but to organise to fight for a decent future for all.