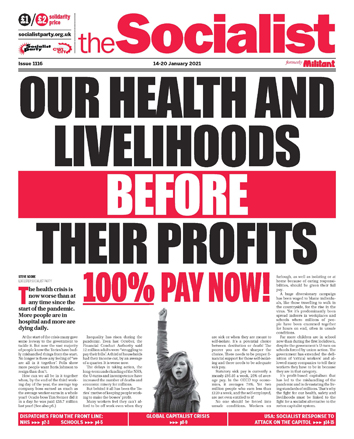 CWU to ballot on national agreement 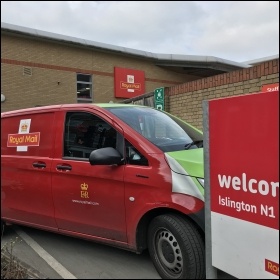 The Communication Workers Union (CWU) postal executive has unanimously agreed to propose to the membership a national agreement that, if agreed, would end the two-year dispute between the CWU and Royal Mail. The agreement has been supported by every divisional officer across the country, and in a national online meeting not one branch spoke against the deal. It looks, therefore, as if all branches will be recommending the deal to the membership.

As socialists we must look at the whole dispute to have a complete understanding of where we are and whether the deal represents a step forward.

Royal Mail was privatised in 2014, which was totally opposed by socialists in CWU. We warned, correctly, that management would see this as a platform to launch attacks on the terms and conditions that the CWU had secured through the combativity of its members. These are vastly superior to those of any company in the sector. So CEO after CEO has looked to dismantle the influence of the union.

In 2018, the 'Four Pillars' agreement secured gains for the membership. This included a legal agreement on issues such as outsourcing, and a flightpath to a shorter working week for postal workers - down to 35 hours by 2022.

The infamous Rico Back replaced Moya Greene as CEO in May 2018. We knew that with his background he would be intent on taking on and smashing the CWU. He made this, and his desire for a Royal Mail structure like that of parcel company GLS, very clear straight away. At that point, the battle lines were drawn. It was evident that he wanted to break up the company and renege on the national Four Pillars agreement, including the shorter working week.

Members within Parcelforce WorldWide had been given 'TUPE' letters - relating to workers' terms and conditions when changing employer. This was an obvious breach of the Four Pillars agreement, and preparation for breaking up the company. It was also clear that management was planning to renege on the shorter working week and had no intention of awarding members a pay rise.

In March last year, at the time of the first Covid lockdown, it looked as if the union was about to announce industrial action. But, bowing down to the 'national unity' mood, the union's national leadership decided not to call strike action. At the time, socialists in the CWU said that the union should have called strike action to defend our terms and conditions, support Parcelforce members, and defend previous agreements around the shorter working week.

This non-action, on the back of the union leadership not acting on the first strike ballot which had been undemocratically dismissed by the courts, gave confidence to the Royal Mail leadership to go on the offensive. They tried to undermine the Universal Service Obligation (USO) - the delivery and collection of letters from Monday to Friday - for a short period, but we believed this would become permanent.

No negotiations had taken place with the CWU, showing management's contempt for the union. This was a crucial part of the dispute. Correctly, the CWU leadership responded, and it looked very likely unofficial action would spread across the country. This forced Royal Mail to sack Rico Back and reach an agreement with the CWU to suspend USO for only a temporary, defined period. It has now been restored.

Even though we got rid of Rico Back, this was not yet a victory. We still had the same management leadership team with the same outlook as Back regarding breaking up the company and smashing the union. But the balance of forces has definitely changed in favour of the CWU and postal workers, forcing management to propose the latest agreement, which makes significant concessions.

There have been changes at senior management level. And the pandemic itself, with the explosion in online shopping, has massively increased postal workers' workload. Postal workers have delivered around a billion parcels/packets since the first lockdown was imposed. This clearly strengthened the CWU's position in the negotiations.

The agreement includes a two-year pay deal. A rise of 2.7% in the first year, backdated to April 2020 and flowing through to all allowances, and another 1% rise in April 2021. This will be widely welcomed by the majority of the membership as, with the current Retail Price Index (RPI) rate at 0.9%, the rise over two years will be significantly above inflation. However, we believe that the second year should have been inflation-proofed, in case the RPI rate rises.

As well as pay, the deal covers a number of other major issues. The pathway to a shorter working week, which management reneged on, is now back on the table. One hour is due to come off the working week as each unit does a revision. This will take postal workers to a 37-hour week. Royal Mail has agreed to enter talks about how to get to a 35-hour week with fully paid meal reliefs.

Royal Mail workers generally accept that the job has been affected by the change in people's shopping habits during the pandemic, and it's unlikely that these will go back to what they were pre-Covid-19. The agreement aims to look at that, including Sunday working in packet delivery companies, which will at first be on a voluntary basis.

On job security, Royal Mail has agreed to keep the 'Managing the Surplus Framework' agreement till May 2023, when it will be jointly reviewed. This means there will be no compulsory redundancies at a time of a major economic crisis due to the pandemic. This will be welcomed by the membership.

Along with a review of workload across the company, this should be an opportunity to convert fixed-term contracts into permanent contracts, give part-time members a chance to progress to full-time, and convert agency workers into direct employees.

It's clear that the CWU has made significant gains through these talks, which have been helped by a complete change in the type of work postal workers preform due to the pandemic. This could be a chance to improve the terms and conditions of our membership.

But we should not think that Royal Mail will just hand over better terms and conditions; there are still a number of issues that need to be resolved. For example, Royal Mail wants to look again at the attendance agreement. So we must not take our foot off the gas. There are still managers who we dealt with before, and the whole culture within the company needs to be addressed. It should be made clear that if these managers don't change they will be sacked. We are not prepared to take the constant bullying culture within Royal Mail.

We in the union need to learn the lessons of this dispute. We should not bow to the idea of national unity and call off industrial action, allowing Royal Mail to go on the offensive. There should not be negotiations behind closed doors which lead to frustration among the members. And when we ballot we should make sure we are ready to take action, no matter what the bosses do. If these steps had been taken, we believe more could have been won.

However, on balance, we welcome this agreement and call for a 'yes' vote. Instead of job reductions and a race to the bottom, the union can now fight to improve the work/life balance of the membership and go into the other companies to organise workers there.

There are two main lessons from the last two years. Firstly, management cannot be trusted and agreements are only as good as the strength of the union and the willingness of members to fight. Secondly, privatisation has been a disaster and is a continuing threat to the jobs and contracts of Royal Mail workers. The union must continue to emblazon on its banner the demand that Royal Mail group be brought back into public ownership.