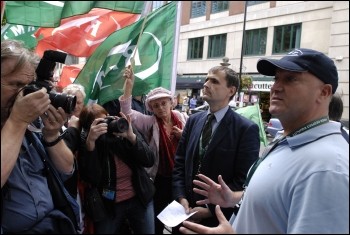 Network Rail signallers and maintenance engineers in the Rail, Maritime and Transport workers' union (RMT) had democratically agreed and planned an effective strike to take place during the four days after the Easter weekend, in defence of jobs, conditions and safety standards. This action was going to bring the entire national rail network to a virtual halt.

But then in their desperation to avoid making concessions, Network Rail bosses went running to the courts to have the strike declared illegal. In a travesty of democracy, the unelected judge did their bidding by arbitrarily overturning workers' democratic rights and granting an injunction against the strike.

This resort to the dictatorial judiciary was being used for the third time in four months, the previous times being against British Airways cabin crew before Christmas and Milford Haven port workers in February. The excuse in each case was alleged infringements of the rigid anti-union laws on balloting or giving notice of action, but the real reason was to try to throw the unions' plans into disarray and weight the balance of forces in the disputes against the workers involved.

As RMT leader Bob Crow said, following the injunction against his union: "This is a highly political judgement based on a further development of over two decades of vicious anti-trade union laws in the UK".

The RMT also expressed concern that Network Rail "may have provided the High Court with false information ...in their efforts to convince the Court of their case". Yet it was the RMT that was slurred with the use of fraudulent tactics in the capitalist media: on Radio 4, an interviewer introduced the term "ballot-rigging" when questioning Bob Crow. But even the lawyers in court had not accused the union of ballot-rigging, only 'errors'. Moreover the RMT's strike ballot was not even conducted by the RMT; to comply with the anti-union laws it had to be conducted by an 'independent scrutineer', which in this case was the Electoral Reform Society.

This judgement shows that any strike can be declared illegal by the courts with their biased, anti-worker nature, when the employers choose to use this weapon that is largely at their disposal.

It is reminiscent of the Taff Vale judgement of 1902, when the railworkers' union was sued by the Taff Vale Railway Company for taking strike action, and the employer won the case with damages of £23,000 being awarded against the union (equivalent to around £2 million today). That draconian judgement spurred on trade union moves towards forming the Labour Party, a vital step forward at the time; but unfortunately the Labour Party is still being funded by the unions today despite its transformation into being a party serving big business. 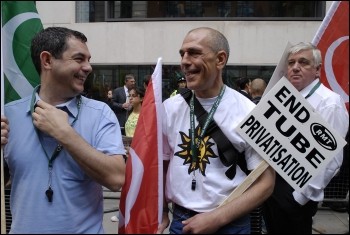 The present anti-union legislation was designed with the precise purpose of obstructing workers from taking effective action, and of making the rules on balloting virtually impossible to adhere to. It is no surprise that reports are emerging of the judge in this latest case having family links with the Tories and also with finance multinational Goldman Sachs that has had major financial dealings with Network Rail.

The last Tory government, elected in 1992, received the votes of only 33% of the registered electorate. It is also the case that the elections that have brought these governments to power have contained plenty of minor 'irregularities', including people being registered twice and people being on registers who have long since moved away from the area of the register, but this doesn't stop these anti-union governments claiming legitimacy.

Trade unions and their members regard strike action as a last resort in the fight to defend or improve wages, terms and conditions. The RMT signallers and engineers simply want to prevent compulsory redundancies, unsafe conditions for themselves and the public and detrimental changes to working practices and conditions. The right to withdraw labour is a basic democratic right, without it there is no real democracy - workers are reduced to slave-like conditions, and this is what the courts are attempting to do.

Also, trade union members should be able to decide themselves on the method for taking decisions collectively in their union. The Lindsey oil refinery construction workers decided to strike last year on the basis of a show of hands at a mass meeting, a method deemed illegal by the government but for the workers involved it was the best method in the circumstances they faced. They were able to listen directly to the arguments of other workers, and then take a fast decision.

Where a union is organising national action of a workforce that is spread out, other methods may be more practical or preferred, but the union should democratically decide how it is done, not the agents of their bosses, who are on the other side of the fence. A union should also have the right to conduct any ballot it wants to have itself, and not be forced to subcontract it to a third party.

When the courts rule a strike illegal, some people may argue that the union can reballot and resume the plan for action, as the BA cabin crew went on to do and the RMT have announced they are doing. But the union suffers huge extra costs in doing this, and more importantly, has the timing of its action dictated by the courts. The cabin crew were stopped from taking action during the Christmas period, and the rail workers during the school Easter holidays, and more importantly for the government, in the weeks before the general election.

This is an intolerable situation and must be opposed with the full vigour of the trade union movement as a whole. Where is the Trades Union Congress (TUC) in this battle? Why hasn't it put its weight behind the RMT with a 'council of war' to plan a suitable response?

Union leaders in any union, after proper preparation inside their union and beyond it in the trade union movement, must be prepared at a certain stage to defy court judgements. This does not mean going down an adventurist path and unnecessarily putting the resources of the union at risk; it should be done on the basis of a solid majority of the union's members being behind the action and a strong understanding among the members of the course of action being taken.

If the courts move to take away the union's funds, that union must call on the rest of the trade union movement to come to its aid, by mobilising in defence of basic trade union rights.

In the meantime, a full campaign of explanation about the nature and purpose of the anti-trade union laws should be organised by the TUC among all its 6.5 million affiliated workers, to build for a massive national demonstration against these anti-worker laws.