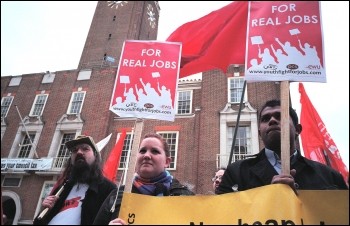 In the general election, none of the three main parties managed to get the votes of even a quarter of the total number of people registered to vote.

Yet regardless of their lack of popularity, the leaders of these parties haggled over the spoils of power.

They were desperate to grab ministerial positions and the ability to bestow favours on their big business friends, not to mention on themselves.

Former Lib Dem leader Paddy Ashdown called the post-election haggling a "deliciously painful torture mechanism" that has been handed to the main parties by the electorate.

But is it so distressing for these capitalist parties to trade this or that policy when they all have the same pro-big business ideology and the fundamental differences between them are paper thin?

When they say "the national interest comes first", they mean big business comes first. When they repeat, virtually in unison, that "the economy and the budget deficit will be at the centre of any deal", they mean they are in complete agreement that slashing public sector jobs and services will be their priority, no matter which parties take the key positions.

The concern of a layer of top Tory and New Labour politicians over a move to some form of proportional representation, as demanded by the Lib Dems, is not based on ideological differences or unfortunately, on what would be more democratic.

Rather it is related to fear over their own future prospects of getting into power and holding onto it.

The 'torture' of Ashdown and his fellow rich politicians is nothing compared to the suffering that all three main parties want to inflict on working and middle class people over the next few years.

The Tories' plan to cut £6 billion in the coming year was described as a "do-able nightmare" by one Whitehall 'source' quoted in the Times on election day.

Contrast the misery that such cuts will cause, with the lifestyles and decadence of a group of bankers who were reported in the London Standard as spending £60,117 on drinks (including £36,000 on one large bottle of champagne) during the night after the election, to celebrate Gordon Brown's election losses and the winning of their bet on the election outcome!

Since this short article was written on Tuesday afternoon for the front page of The Socialist, a Tory-Lib Dem coalition has been declared.

During this new government, major cuts in workers' jobs and services to fund the bailouts given to the likes of the above bankers, will be the name of the game (as would also have been the case under a New Labour dominated government).

This won't be accepted by working class people. The new government will inevitably be extremely weak. A determined and escalating trade union movement campaign of opposition to cuts and privatisation can force it to retreat.

Alongside trade union demonstrations and industrial action, the issue of workers' political representation must also still be addressed.

Unpalatable as it seems right now to most people, there could be another general election soon. The earlier that TUSC (the Trade Unionist and Socialist Coalition), or a successor to TUSC, restarts the process of building workers' support and a national profile, the closer workers will be to having their own voice in the national political debates to come.

An article on the new Tory/Lib Dem government will be posted on this website soon.