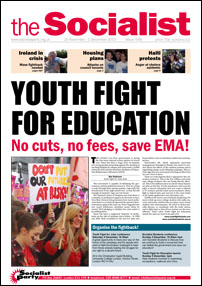 On the first night there was a positive mood and we drew up a statement about why we had occupied along with some demands. We also spoke to the local press.

The numbers dwindled as time went on, partly because of a lack of organisation and because we were in a lecture theatre which didn't disrupt management too much.

However on the fourth day more people joined us for a discussion about the controversial appointment of Nato director of policy planning, Jamie Shea, as a lecturer in International Relations.

On the same day we received the welcome news of a potential occupation at London's SOAS university which many regarded as the accomplishment of one of our goals - to encourage other universities to occupy.

We stayed for four nights after which it was decided that it would be tactically better for us to leave. Although not a raving success, the occupation was a starting point and we will learn from our mistakes. We are now focusing on the national day of action called for 24 November and preparing for future struggles.

At the time of going to press, 60 students from the University of the West of England (UWE) were occupying the 'core 24' building at the university's main campus in Frenchay, Bristol for the second day.

This occupation started in anticipation of other events later in the week including a demonstration on 24 November where students from UWE will link up with students from the University of Bristol, City College of Bristol and secondary schools around the city.

Students inside held discussions about why they are protesting and the way forward for the anti-fees movement. Food was provided by lecturers at the university and the UCU lecturers' union sent speakers to talk to the students about how the cuts will affect them. A local branch of the National Union of Teachers also brought food and solidarity greetings.

Nigel Varley, Chair of the Bristol Anti Cuts Alliance, came down to speak to us about the anti cuts movement in Bristol and how we are all being hit by Tory cutbacks.

Messages of support and solidarity have come in from Socialist Party branches and Socialist Student societies across the country. Messages have also come in from local community groups and trade unionists.

In the evening a sound system was brought in so we could have a party, which brought in more students who we could discuss with.

The success of the occupation and the support shown from outside led us to vote to continue the occupation, hopefully until 24 November when we will join students walking out in protest over tuition fees and education cuts in the centre of Bristol for the student demonstration.

As we went to press, students at Manchester Metropolitan, SOAS and Royal Holloway universities were also occupying in anticipation of 24 November.

SOAS will almost certainly lose 100% of its teaching grant as a result of the funding changes because it offers only arts and humanities degrees.