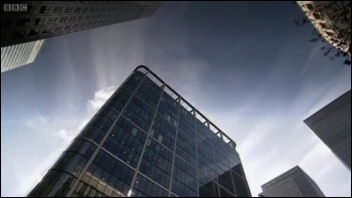 Journalist Robert Peston's BBC documentary, Britain's Banks: Too Big to Save?, gave a useful explanation of how Britain's banks have operated over the last two decades, leading to the banking crash of 2008.

Today Barclays, HSBC and Royal Bank of Scotland have a portfolio of loans and investments valued at over £1.5 trillion, greater than the value of the entire British economy. Peston warns that since 2008 "nothing has substantially changed" in the way the banks are run and that now, with public finances in ruins after £1.2 trillion of bailouts and underwriting, Britain's banks would be "too big to save" should another crisis develop.

In the 1980s the Basel Accords on bank regulation were introduced in response to a banking crisis precipitated by Latin American governments defaulting on international loans. The period saw the explosion of a "shadow banking sector" as deregulation made the accords, in comparison, look like a huge inconvenience for profit-hungry bankers. Companies, that were financed by the banks but outside the scrutiny of the regulators, were set up. The use of complex financial instruments became ever more widespread.

Peston illustrates the new banking practices rather aptly, with a trip to the races. He describes derivatives as nothing more than "a bet that something will be a certain price at a certain time" and that bankers were using expected returns that had not yet materialised as up-front capital. This is no different to spending your winnings before the horse has even come in! This speculation meant that by 2008 the combined "value" of just one type of derivative was over $600 trillion worldwide, some ten times global GDP!

Peston describes the contradiction that lies right at the heart of capitalist banking, a system called "fractional reserve banking". If everyone with deposits in a particular bank wanted to withdraw them at the same time the bank would not be able to pay out because most of the money has been loaned or invested. Today the banks retain less than 1% of deposits.

When put like this, the seemingly intangible idea of "confidence" clearly has a strong material basis! One expert comments that "confidence is the financial system" which is nothing more than a 'complex pyramid of claims'. Peston shows a clip from Mary Poppins to illustrate the fragility of this system. The character Michael, being pressured by his thrifty father to invest his tuppence pocket money, precipitates a bank run by shouting "the bank won't give my money back!", thus creating a panic.

Socialists would agree that banking along capitalist lines is very unstable. But we would point to a more fundamental contradiction of the banking system than Peston. For ordinary people banks are about having somewhere safe to put your money or somewhere to get a mortgage or loan. However, the raison d'etre of banks is the pursuit of profit. Providing a basic service to society is incidental. For the super-rich the banking system is a means of lining their own pockets.

There was a chorus of calls for greater regulation of the banking sector after the bank collapses - locking the stable door after the horse had bolted. But why would a new raft of regulation work any better than the Basel Accords or other international agreements to regulate banking? The super-rich found ways around those regulations and they would be able to do so again. As long as the motivation of all banking activity is profit, the incentive to take risks with our money and charge us excessive interest and costs is permanently there.

Another interviewee argued that the only other choice was to break up big banks so that they are no longer "too big to fail", but he also added that modern capitalism needs big banks. Where else would multinational companies and international speculators with trillions put their money? And how else would they move it?

The most important issue isn't the size of the banks but that the Con-Dems, and New Labour before them, refuse to use the government's majority stake that they have in some banks to exert any real control, as shown by the bonus debacle. They are completely committed to allowing them to run along failed capitalist lines. Also, they do not want to take control of all of the main banks.

The socialist solution lies in taking the banking sector into public ownership, and using that ownership to exert democratic workers' control so that the banks are run in the interests of the majority. That is the only way to cut short the super-rich's 'day at the races' and prevent another banking crisis in the future.